Following are reports by Workers World correspondents Bill Bateman, Jim McMahan and Gloria Rubac on a few of the Martin Luther King Jr. Day events that took place in the United States.

The 32nd Annual Martin Luther King Day event in Seattle was infused with the demand for a $15-an-hour minimum wage for the U.S. working class. The Jan. 20 march of an estimated 5,000 to 10,000 workers was flooded with “$15/hr.” and “End Poverty Wages” signs.  An early workshop, one of many, stressed building anti-racist unity in this struggle.

At the opening rally at Garfield High School, Aaron Dixon, former Seattle Black Panther leader and author of “My People Are Rising,” was a featured speaker. The 2-mile march to downtown had at least 10 union contingents, along with community and rank-and-file organizations.

At the closing rally, newly elected Seattle City Council member, socialist Kshama Sawant, said: “The landscape of poverty could cause an upheaval for social justice. We need hundreds of thousands of people marching everywhere to make change. I am not going to organize your neighborhood group for $15 an hour — You must! The struggle is about shaking the foundations of U.S. capitalism. It’s about putting the business establishment on notice that we won’t be oppressed anymore!” 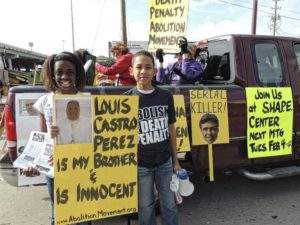 The family of a Mexican man set for execution on Jan. 22 in Texas participated in Houston’s Martin Luther King parade, calling for a stay of execution for Edgar Tamayo Arias.

The Texas Death Penalty Abolition Movement featured the case of Tamayo as well as others with execution dates and several with cases of innocence in the 36th Annual MLK Birthday Parade. As thousands lined the Houston streets, crowds cheered as they saw signs calling Texas Gov. Rick Perry “a serial killer.” Texas has executed more than 500 people since the death penalty was reinstated in the 1970s and Perry has presided at 269 executions since 2000.

Delia Perez Meyer, whose brother Louis Perez has been on death row for 16 years, spoke about her brother to the crowd: “Today we focus on Tamayo’s case but also on others who have issues of innocence, like my brother. The Innocence Project in New York has taken his case and we are finally getting the DNA testing we have been asking for these last 16 years. We must stop executions because too many mistakes are made. Dr. King was about justice and that is what we are seeking today.”

With signs and banners calling the death penalty racist and anti-poor, for the release of Mumia Abu-Jamal and for the abolition of capital punishment, the Abolition Movement contingent was received with cheers, raised fists and shouts of “You are so right! Thank you!”

The Rhode Island Mobilization Against Poverty was officially launched at the 9th Annual RI MLK All-Peoples Assembly in Providence on Jan. 25. The Mobilization has made a call for a massive united action at the Rhode Island State House on April 2 to defend 80 years of “New Deal” programs: Social Security, unemployment Insurance, food stamps, etc., and 50 years of “War on Poverty” programs: Medicare, Medicaid, Head Start, etc.

The RI Mobilization Against Poverty is calling for jobs for all; a WPA-style jobs programs; an “A. Phillip Randolph” minimum wage of $15 an hour; an economic bill of rights; progressive corporate and personal income taxes; and “No” to regressive sales taxes.

Mary Kay Harris, one of the 1.3 million workers cut off from unemployment benefits on Jan. 1, chaired the main assembly, as well as a very special Women’s Caucus scheduled for the purpose of planning a Women-of-All-Colors Assembly on March 8, International Women’s Day.

The women’s conference will bring together working-class women of all races and backgrounds from around the region to share their issues and struggles. The event will establish a permanent RI Women’s Assembly.