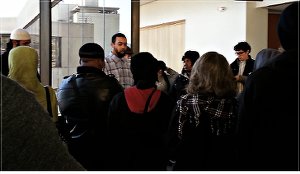 Oakland, Calif. — More than 75 supporters packed the courtroom on Jan. 13 to support “the Trayvon 2,” Hannibal and Tanzeen, who were arrested during the massive protests after the George Zimmerman verdict, which let Zimmerman off scot-free for the killing of Trayvon Martin. Hannibal and Tanzeen, who, significantly, are both men of color and Muslims, are the only ones still facing charges.

The preliminary hearing was rescheduled to March 6 at the request of the prosecution, after the failure of their main witness, the arresting officer, to show, despite being subpoenaed by the defense. The judge was forced to issue a bench warrant for the Oakland Police Department officer to assure his presence in March!

After court was adjourned, the supporters gathered in the hallway to hear the Trayvon 2 address them. Hannibal observed: “They think we’re going to bow down and take a plea. It’s important for other people to witness this … important to share this moment as a community. We can have all these people who can tell the truth. I’m confident, based on the support we’re getting, that we’re going to see justice. We’re out here for Trayvon Martin, Kenneth Harding, Ranisha McBride and many others. It’s such a beautiful thing that you all are here.”

Tanzeen added some serious notes about what was required to win: “We also need money and organizers.” Donations can be made for their legal defense and support at wepay.com/donations/1872666567.

Supporters are asked to pack the courtroom again at their next hearing date of March 6 at 8 a.m. in the Wiley Manuel Courthouse on 7th and Washington streets in Oakland.