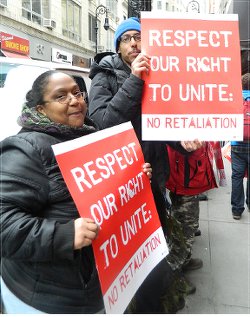 “We’re going to beat! back! The bosses’ attacks” was the chant of more than 35 people in front of the Wendy’s at 85 Nassau St. in the heart of New York’s financial district on Jan. 15.

As fast food workers have started to assert themselves and protest for better pay, working conditions and unions, retaliation by the bosses has grown more blatant.

Rynetta Bennett, who worked for this Wendy’s for seven years, has been a leader in these protests. She was fired for having a wrinkled uniform and using company time to press it.

Every day at 4:30 p.m., workers from other fast food operations in the area, responding to the call of Fast Food Forward, members of 99 Pickets and the People’s Power Assemblies have protested in front of and inside this Wendy’s.

The size of the protests has grown over the week and will continue to grow until Wendy’s rehires Bennett.