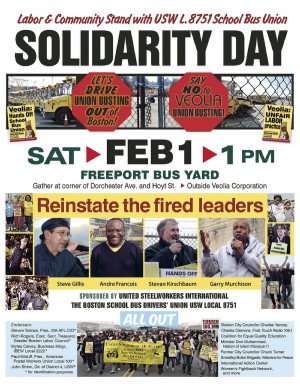 Veolia Transportation, the giant transnational conglomerate, is finding itself increasingly isolated in its attempt to break the leadership of United Steelworkers union Local 8751, the Boston school bus drivers union.

A week after the union-busting, anti-labor firm lost its commuter rail contract, Boston area labor leaders issued a joint call for “Solidarity Day 2” — the Feb. 1 demonstration at Veolia’s corporate offices that will demand reinstatement of the four leaders fired by the company in November.

Among the initial endorsers of Solidarity Day 2 are Paul Kilduff, president of the American Postal Workers Local 100; Charles Clemons, founder and manager of Touch Radio 106.1, Minister Don Muhammad, Nation of Islam Mosque 11, the Coalition for Equal Quality Education and others (download leaflet at tinyurl.com/ldvcvn9).

The campaign for USWA Local 8751 has already shown that Veolia isn’t all-powerful. Although the company is appealing the decision, the four have won the right to collect unemployment benefits, thanks to the intervention of Mass AFL-CIO head Steve Tolman.

This helps the case of the drivers as it contradicts the notion that the firing of the drivers was “justified.” In the face of the groundswell for the school bus drivers union, Veolia is proceeding with its show trial of the four fired drivers, with a grievance hearing set for Jan. 23. The demands of finance capital — demands that dictate Veolia’s actions and mandate austerity for all of society — have a much bigger agenda than four firings. The ultimate goal is to tear up the contract altogether and set wages at historic new lows.

Also at stake for the Boston community is the resegregation of Boston schools, a campaign that the school bus drivers have been involved in fighting. Veolia is helping this racist campaign by paying for its billboards.

Veolia is also hoping it can make the drivers’ firing a fait accompli before its contract to run the school bus system is further scrutinized by Boston’s City Council. On Jan. 15, the same day the joint call was issued for Solidarity Day 2, Boston City Councillor Charles Yancey issued his 2014 legislative agenda.

The top item? A hearing investigating Veolia’s multiple violations of the school bus employment contract — which put it in violation of its vendor contract with the city of Boston.