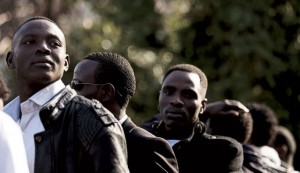 Tens of thousands of African migrants suspended a general strike Jan. 13 that had been in effect since January 5 in the Zionist state of Israel. The strike is scheduled to resume on Jan. 15 in the aftermath of the death of Ariel Sharon.

A list of demands put forward by the African community — most of whom come from Eritrea and South Sudan — calls for the nullification of the recently enacted Anti-Infiltrator Law, a halt to arresting people under that law, the release of those currently jailed and a review of asylum requests for Eritreans and Sudanese. The strike impacted the hotel, restaurant, café and cleaning services sectors of the Israeli economy.

Some 60,000 migrants from Eritrea and South Sudan have entered Israel since 2006. Over the last two years, a new detention facility has been constructed to hold migrants on the border with the Egyptian Sinai.

The migrants are forced to flee ongoing conflicts in Central and East Africa and the subsequent economic devastation they have created. These conflicts are a direct result of Western imperialist interference in the internal affairs of post-colonial African states.

The Workers’ Hotline organization has received numerous complaints from African migrant workers of terminations and other threats from employers. “A group of workers came to our offices, and we also got phone calls from workers in Eilat who were told not to come back, and that their strike was seen as quitting without notice,” said Noah Kaufman, who works as a coordinator for refugees and asylum seekers at the agency. (Haaretz, Jan. 13)

Kaufman went on to say, “There were two accounts of workers given ultimatums — either agree to change their employment conditions for the worse, or quit without getting severance pay or notice.”

The agency says it is developing a legal strategy for addressing the ultimatums and firings.

A staff attorney for the Hotline, Michael Tadjer, stated: “Employers cannot exploit the asylum seekers’ suffering to worsen their terms of employment. They are using this as a means to threaten their workers. In essence, they’re saying, ‘We can fire you, so either you quit or we take away your seniority, worsen your conditions,’ or lots of other things. Employers are using this for exploitation.” (Haaretz, Jan. 13)

Tadjer went on to note: “The legal question is how much the strike was protected. Although they are unorganized workers, there is an umbrella organization that declared this strike, and there have been precedents in Europe in which sectors of the population went on strike in protest against the government, when policy directly harmed individuals. This strike is a political strike, and it might be that it is supported by law, but it hasn’t come up for legal review. We think that firing workers after a week-long strike against a law that harms the most basic thing — their freedom and ability to work — is an act committed in bad faith.”

The political actions of the African community in Israel have created a sense of urgency. On Jan. 12, long lines gathered outside the immigration offices in Tel Aviv in order to fill out forms requesting asylum.

One migrant told Haaretz, “I had an appointment, and the first security guard passed me through. The second one said, ‘You’re leading all of the protests and strikes, you were interviewed on Channel 2, I’ll show you.’ He tore up the slip, and said, ‘Go home,’ and began to scream at me.”

Political attacks on the African migrant community have been growing for the last two years. From low level politicians to Prime Minister Benjamin Netanyahu, Africans have been labeled as “infiltrators” and “criminals.”

There have been anti-migrant demonstrations by Israeli settlers through neighborhoods where African migrants live and own businesses. Africans have been beaten and their stores trashed.

In response to these racist provocations the African migrant community is becoming more outspoken and militant. The general strike and the subsequent mass demonstrations are a reflection of a heightened consciousness and organizational sophistication.

On Jan. 6, thousands of migrants marched to the foreign embassies in Tel Aviv seeking international intervention on their behalf. Some Israelis have marched in solidarity with the migrants’ demands. On Jan. 9, thousands gathered outside the parliament in Jerusalem where several left-wing labor politicians addressed them decrying the conditions which they are subjected to by the Israeli authorities. (Reuters, January 8)

David Grossman, a writer who has been labeled as a member of the Israeli left-wing, told the mass demonstration in Jerusalem that the state’s treatment of the migrants was shameful.

“I look at you now. … I feel embarrassed and ashamed. Israel has not created this problem, but there is a problem now (and) we have to struggle with it and to solve it in the most humane way.”

Continuation of settler policy against Palestinian and Arab people

Nonetheless, Israel is inherently a settler-colonial state, born in alliance with world imperialism through the suppression, oppression, forced removals and mass killings of the Indigenous Palestinian Arab population. Palestinians still live as colonial subjects in their national homeland and are subjected to constant detentions, dislocation, racist discrimination, military occupation, and repeated attacks by the army and air force.

Palestinians who have been forced from their homeland are denied the inherent right of return. In the Gaza region of the country, 1.5 million people live in what has been described as the largest open-air prison in the world.

Israel also occupies the Golan Heights in Syria, where an imperialist-backed war of regime-change has resulted in the deaths of at least 100,000 people over the last three years. The Israeli Air Force has carried out several bombing incursions against Syria in just the last year.

Other Israeli air strikes have been carried out against the Republic of Sudan, a staunch supporter of the Palestinian national liberation struggle, which maintains a close fraternal relationship with Iran. Israel is backed up by the U.S. government through billions of dollars in direct aid, diplomatic support and military assistance.

Developments in Israel involving the escalating repression against African migrants should be seriously taken up by the African Union and other mass organizations on the continent. Israel was one of the main advocates and supporters of the partition of South Sudan from Khartoum, leading up to its realization in 2011.