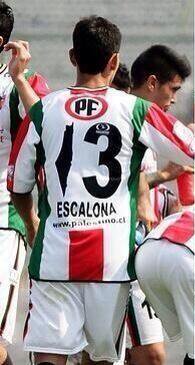 The Club Deportivo Palestino, a first division football (soccer) team in Chile, has found a novel and dramatic way to display their support for Palestinians living in occupied Palestine. The team replaced all of the number “1”s on their jerseys with an iconic map of occupied Palestine.

Chile is home to the largest population of Palestinians outside of the Middle East, with 500,000 people of Palestinian descent living there.

The jersey map symbol has raised a howl of protest from Zionist organizations in Chile, Tel Aviv and Washington. The Israeli Foreign Ministry’s deputy director general for Latin America, Itzhak Shoham, called the map a “provocation … with the evident intention of denying the existence of Israel.” (English.al-akhbar.com, Jan. 9)

Gabriel Zaliasnik, the former president of Chile’s Jewish community, demanded a public apology from CD Palestino, removal of the jerseys, and sanctions by the Chilean football association and the International Federation of Association Football (FIFA).

The U.S.-based Anti-Defamation League chimed in as well, saying: “This clear delegitimization of Israel by substituting for it their map of ‘Palestine’ is also ­antithetical to the spirit of international sports competition.” ­(sedjewishworld.com, Jan. 8).

What the Zionists fail to mention are the vicious Israeli attacks against Palestinian soccer players. Israel’s bombing attack on a soccer stadium in Gaza in November 2012 killed four young players.

FIFA itself protested the treatment of imprisoned Palestinian hunger-striker Mahmoud Sarsak and the imprisonment of other Palestinian soccer players for “anti-Israeli” activities.

CD Palestino has steadfastly refused to remove the map logos from their jerseys. The Palestinian Federation of Chile slammed the criticism, saying, “We reject the hypocrisy of those who blame this map, and yet talk about the occupied territory as disputed territory.” (Al Arabiya News, Jan. 12)