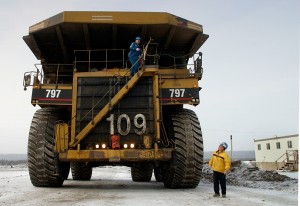 Equipment at oil sands mine in Alberta, Canada.

The tar sands of Alberta, Canada, are the dirtiest, most polluting oil source in North America and require very specialized, massive evaporators to extract the oil they contain.

For months, a coalition of Native and environmental activists has been fighting the transportation of this equipment through Indigenous lands in the Northwest.

General Electric makes these huge evaporators, used to reclaim water from tar sand processing at its plant near Portland, Ore. Each one is 96 feet long and weighs up to 644,000 pounds. The convoy that transports them is 380 feet long, 19 feet high, 23 feet wide and weighs around a million pounds. It takes up two traffic lanes.

The first route GE tried to use went through Nez Perce (Niimíipu) tribal lands on Highway 12 and was stopped cold by a blockade led by Nez Perce elders, with the support of environmental activists armed with an injunction.

So GE’s hauling company, Omega Morgan, chose another route from the port of Umatilla, Ore., to Homedale, Idaho, along a series of winding mountain roads.

Omega Morgan’s attempt to move the first mega load Dec. 2 met quick resistance from the Confederated Tribes of Umatilla, supported by local environmental activists. The protesters — or “protectors” according to the Native activists — locked themselves to the loads, stalled cars in front of them and generally slowed the convoy down.

The first load hit bad weather and lacked permits to move through Montana. The second began moving on Dec. 22 and is nearly in Idaho. The third is still waiting in Umatilla.

In a Dec. 9 letter to Oregon Gov. John Kitzhaber, the board of trustees of the Confederated Tribes of Umatilla challenged the permits issued for transportation of the mega loads. They cited lack of consultation with the tribe by the Oregon Department of Transportation. Board chair Gary Burke noted that “tar sands mining has had negative impacts on Indigenous peoples in Canada, causes significant environmental damage, and is a contributor to global climate change.” (yesmagazine.org, Jan. 8)

Linda Sampson, a member of the Walla Walla tribe, added, “In the global picture we all have to breathe the same air, we all have to drink the same water. And as the destruction continues it’s going to affect us.”