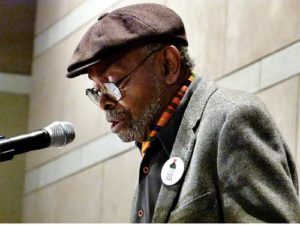 Amiri Baraka, a longtime Black revolutionary who was very influential in the struggle against racist and class oppression for over five decades, died on Jan. 9 at the age of 79, following a short illness in Newark, N.J.  At a Jan.10 public forum in New York City, Workers World Party First Secretary Larry Holmes pointed out that Baraka used his status as a spoken word poet, writer and playwright to help elevate the Black liberation struggle starting in the 1960s — when he was first known as Leroi Jones — until his death.  It was this powerful combination of politics and artistry that propelled Baraka as a towering, respected and beloved figure within the Black movement and among other progressive sectors.

Go to blackleftunity.blogspot.com/?view=magazine for tributes to Baraka.  A full obituary on Amiri Baraka will appear in a future issue of WW.