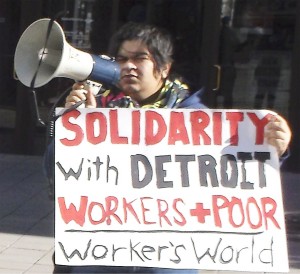 Demonstrations were held on Jan. 3 and 4 in several cities coast to coast in support of the people of Detroit, who are facing loss of their pensions, city services and city assets. As a result of a deal made by Detroit’s emergency manager with Bank of America and United Bank of Switzerland, the residents of Detroit could be forced to pay $165 million, plus $4 million in breakage costs, to terminate interest rate swaps with the banks. The demonstrations coincided with a Detroit bankruptcy court trial on the swaps that is expected to conclude Jan. 7.

Community activists in Oakland, Calif., picketed a Bank of America branch office in solidarity with the retirees and residents of Detroit, who are fighting against the city’s bankruptcy and an attempt by the banks to steal even more of Detroit’s dwindling funds. There have been related struggles in the city of Oakland regarding usurious credit default swap deals with Goldman Sachs. 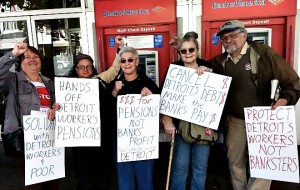 Activists in Raleigh, N.C., picketed the downtown headquarters of Bank of America during the busy lunch hour on Jan. 3. Despite harassment by bank security forces, the demonstration held strong, with many passersby showing support. “The struggle of Detroiters really resonates with working people here, who are feeling the same squeeze from unemployment and cuts,” said Eva Panjwani, an organizer with FIST — Fight Imperialism, Stand Together. “We see our future in Detroit.” 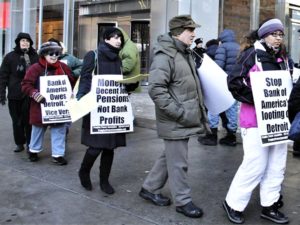 Demonstrators called out by the Peoples Power Assembly in New York City picketed for an hour in the snow on Jan. 4 outside the offices of Bank of America across from Bryant Park to show solidarity with the people of Detroit. According to PPA spokesperson Larry Holmes, the big banks, including Bank of America, “have ripped off the city of Detroit’s money with toxic debt and are jeopardizing the hard-earned pensions of thousands of city workers. And it could happen in New York too.”