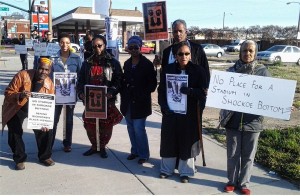 Charleston, S.C.; New Orleans; England’s Liverpool; Senegal’s Goree Island — all these places played major roles in the U.S. slave trade and all have museums that tell those stories.

But here in Richmond, Va., once the capital of the slavery-defending Confederacy and for decades the center of this country’s internal slave trade, a small group of “developers” and a compliant mayor are proposing to use the city’s former slave-trading district as the site for a new commercial baseball stadium.

The result has been Richmond’s biggest community battle in decades.

In the 30 years before the Civil War, up to 350,000 people of African descent were sold from Virginia to plantations in the deep South. Their unpaid labor enabled the United States to supply three-quarters of the world’s cotton — the raw material for textile production, capitalism’s first major industry. The profits made were as enormous as the suffering they rested on.

With its strategic location on the James River and its increasing importance as a railroad center, Richmond became the primary market for this buying and selling of human beings. The trade was concentrated in Shockoe Bottom, home to 40 to 50 auction houses, a half-dozen slave jails and scores of service businesses.

Because of the massive nature of this enterprise, the majority of Black people in North America could likely trace some ancestry to Shockoe Bottom. This truly is ground worth preserving.

But this is where Mayor Dwight C. Jones is proposing to build a baseball stadium for the Flying Squirrels, the AA farm team of the San Francisco Giants.

Tearing down the present stadium would open up prime real estate to commercial development. And building a new stadium in Shockoe Bottom would increase the value of residential and commercial property there, much of it owned by a developer who a decade ago went to prison for bribing a member of the City Council.

The mayor promises the $200 million development proposal would bring in up to $187.6 million in new tax revenue over the next 20 years. But first the city would have to commit $80 million for the new stadium and infrastructure improvements, a serious public debt for this majority-Black city with a 26 percent poverty rate.

The proposal’s finances have drawn widespread criticism, but it’s the potential government-sponsored desecration of a sacred site that has really motivated opposition.

“At its heart, this is a struggle by the oppressed for the right to self-determination,” said Ana Edwards, chair of the Sacred Ground Historical Restoration Project, which is playing a leading role in this struggle. “It’s about process, the right to know, interpret and tell our stories of injustice and liberation, from before slavery times right up to today.”

The past year has seen street protests, vigils and public meetings. Council district hearings on the issue have become battlegrounds for community opponents and business supporters.

More than 2,100 people have signed a petition opposing a stadium in Shockoe Bottom. Three dozen Virginia scholars have signed an anti-stadium statement. The Richmond branch of the NAACP and other Black community groups have come out against the plan; not one Black organization has expressed support for it.

The plan does provide for memorialization of three slavery-related sites in the Bottom. However, to be located on a narrow strip of land wedged between a highway and the railroad tracks, they would be overshadowed by the stadium.

Community advocates are instead calling for the creation of an eight-square-block Sacred Ground Memorial District, which would include those three sites and eventually a museum exploring Richmond’s role in the domestic slave trade. The district would be just large enough to prevent a stadium from being built there.

Momentum to stop the stadium is growing daily, but winning support for the memorial district — and setting up a governing body that would honestly tell the stories of what happened in Shockoe Bottom — will take even more effort.

Those outside Richmond can help by signing and promoting the online petition posted at www.shockoebottom.blogspot.com. The website includes background material as well as updates on the progress of this struggle.