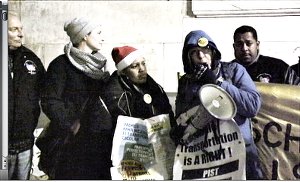 Relatives and supporters of New York City school bus riders ended 2013 expressing their determination to gain improvements for children and workers, despite the destructive chain of events set in motion by the billionaire class.

A year ago, a four-week school bus drivers’ strike was provoked when billionaire Mayor Michael Bloomberg and his Department of Education appointees put out bids without Employee Protection Provisions on 1,100 school bus routes.

Since school busing is contracted out to private companies that go into and out of business, the basis of stability is to have drivers and attendants with years of experience follow the contracts from one company to another. EPPs enforce seniority hiring, along with benefits that make it worthwhile for workers to stick with busing despite such stresses as long days, hostile bosses, clueless routers and city traffic.

The warning from 8,800 strikers was: “You get what you pay for.” Parents and the union charge that while most of the 2,200 school bus workers laid off in June remain unemployed — they run out of benefits at the end of December — low-wage companies are not properly training or retaining new hires.

On Dec. 5, corporate busing giant Atlantic Express entered the last stage of bankruptcy. AE could not compete profitably in bidding with non-union companies that pay half as much.

AE had unilaterally imposed a 7.5 percent wage cut starting in March 2013, but that was later ruled illegal by federal courts. Then AE tried to bully New York City workers into a new contract which would ratify the cutback and others, and also let the company forget about paying back tens of millions of dollars it had withheld for work already performed.

According to a letter AE gave to workers, approval of that contract was a condition cited by Wells Fargo bank for extending credit to help the company survive till June. On Dec. 4, the “no” vote at the bus yards was overwhelming. As the winter break began, AE abandoned some 1,500 New York City school bus routes — and many more across five states.

Parents to Improve School Transportation (PIST) went into action, alarmed at the prospect of 2,000 layoffs that would affect at least 35,000 general and special education students on Jan. 2. This is on top of the recurring chaos caused each September by unrealistic bus routes.

School bus parents from various neighborhoods and organizations signed a letter to the newly elected city administration, called a press conference and projected a larger public meeting for Feb. 8.

The letter to incoming Mayor Bill de Blasio (available as a link at schoolbook.org) demands that the city respect the civil rights of school bus riders with disabilities, resolve the Atlantic Express crisis, investigate conditions at non-EPP companies, and restore EPP in all route contracts that have not yet taken effect.

Through the combined efforts of parents and ATU 1181, school bus concerns were covered in the English – and Spanish-language media before and after the Dec. 17 gathering. That same night, the Department of Education issued its weekly email to school principals, which included a letter to parents about the chance of a bus shortage on Jan. 2. It promised subway Metrocards — which are useless for those who need school busing the most.

As of this writing, school bus parents and workers consulting DOE’s website say that many — but not all — AE routes have been transferred to unionized companies with EPP. Some were rearranged so inefficiently — routes in one borough assigned to bus yards in a distant borough, etc. — that student lateness and employee attrition are sure to increase. The impact on field trips is unknown.

Bloomberg’s DOE promoted union busting and austerity at the expense of school bus riders. New Yorkers hope things can change with his departure, but Wall Street is still a factor. A united front of the education, labor and disabled movements, powered by those most affected, can accomplish much — not by merely hoping, but by continuing to organize. Contact [email protected] or 347-504-3310.