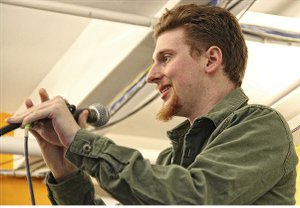 In Ecuador, years of organizing, resisting and fighting back led to the election of President Rafael Correa in 2006. Correa is identified with the protest movement. His election was a referendum on neoliberalism, and he won overwhelmingly.

After Correa was elected, the U.S. imperialists tried to overthrow him. They turned to the Ecuadorian police, who kidnapped him. But the people of Ecuador poured into the streets and fought back. They rescued their president and beat back the CIA.

President Correa leads a coalition of anti-imperialist forces. Something similar is happening in Venezuela, Bolivia, Nicaragua and other countries in Latin America. These governments are anti-imperialist and strive for independence from the dominion of the capitalists in the U.S., Britain, France and elsewhere. Called the “Bolivarian Process,” this is greatly improving the lives of millions of working-class people.

In Ecuador, we saw free dental care. Dentists were in tents. If you wanted some dental care, you just got in line and they took care of you for free.

People with no health insurance can now go to free health care clinics run by Cuban doctors. Poor people in Ecuador who were blinded because of poverty now have their sight back, thanks to free surgery provided by the Cuban doctors.

Ecuador is trading with other countries from the oppressed world and with Russia, China, Cuba, north Korea and Iran. This trade is mutually beneficial.

While capitalism remains intact in Ecuador, something is happening. The working class is in motion, and the imperialists are being pushed back.

All these movements take inspiration and guidance from Marxist-Leninist revolutionary leaders like Che Guevara and Fidel and Raul Castro.

The World Festival of Youth and Students was revived in 1997, mainly by the Cubans. Every four years since then, young communists have met for a week to discuss the struggle to bring down capitalism and fight imperialism.

We in the WWP delegation met with over 20 different communist youth organizations from around the world. The most inspiring meetings were with youth who live under socialism.

Two members of Cuba’s Young Communist League worked with us throughout the week. In addition to formal meetings, we had many relaxed social dinners.

The honesty of the Cubans was inspiring. We asked about the rights of women and of lesbian, gay, bi, and trans people in Cuba. They said Cuba is still struggling against patriarchy and the idea that men are the heads of families.

In recent years, there has been a campaign to bring equality to LGBT people. Ads are on display promoting LGBT rights. Anti-LGBT violence is being cracked down on and has basically been eliminated.

There are still problems. If youths come out as LGBT and their parents are hostile to them, the Young Communist League will intervene and work with the families, counseling them to be accepting of the youths.

The Cubans had questions for us, asking about education in the United States. When we told them there are police in the schools, arresting students, they were horrified.

Meetings with Korean and Vietnamese youth

We met with the Kim Il Sung Youth from People’s Korea. The delegates from the DPRK were really the stars of the festival. They sang beautiful music, not just Korean but Cuban revolutionary songs. They seem like the happiest people on earth.

When reading statements or giving a presentation, they were very serious. But you could see the real love and affection they had for each other. They told us they hate what they called the “fascist imperialist government of the United States,”but they had no hatred for ordinary working people in the United States.

We were invited to a special meeting by the Ho Chi Minh Communist Youth Union of Vietnam. A Vietnamese comrade from the Los Angeles branch of Workers World Party translated.

The Vietnamese described how it will take more than 300 years to repair all the damage done to their country by decades of war. They said they are not yet a socialist country like Cuba or the DPRK, but are moving in that direction.

The youths said capitalism still exists in Vietnam, but the party is in charge, controlling and regulating it. They said the party is using capitalism to build up a socialist economic infrastructure, much like what Lenin did in the Soviet Union during the New Economic Policy. They provide free health care to all young children and have gotten rid of illiteracy.

We told them WWP demands that the U.S. government pay reparations to the people of Vietnam for its many crimes.