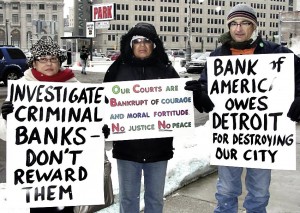 Something unexpected happened in the city of Detroit bankruptcy case in court on Dec. 18.

Judge Steven Rhodes adjourned the trial, which had been called to get approval for a settlement on “termination fees” that the city allegedly owes to Bank of America and United Bank of Switzerland. The banks claim they’re owed the money because of a deal in 2006 involving “interest rate swaps.” The fees would eat up money needed for retired city workers’ pensions and other vital services.

Rhodes ordered the parties back to the table to come up with something better because it was clear that Emergency Manager Kevyn Orr had not established that the deal with the banks was in the best interests of the people of Detroit. Orr’s undemocratic appointment by Republican Gov. Rick Snyder has rendered powerless the city government elected by the people of Detroit.

Under the deal EM Orr made with the banks, the city would have to pay Bank of America and UBS approximately $200 million to $230 million, or 75 percent of the termination fee for the swaps. This amount would be financed by a Barclays loan, which would then charge the city up to 8.5 percent interest.

This swap termination loan would be guaranteed by city income tax revenue. That means for the first four or five years after bankruptcy, the people of Detroit would be turning over 20 percent to 40 percent of their income taxes to pay off the banks for this deal.

In 2008, after the crisis and the potential collapse of financial institutions caused by their fraudulent subprime mortgage lending practices, interest rates charged the banks by the U.S. Treasury went down to about 0 percent. In this way the federal government bailed them out with trillions of dollars of taxpayers’ money.

The effect of this bailout was that the same banks which precipitated the crisis in Detroit and destroyed the city’s neighborhoods with their lending practices, began in 2008 claiming a $50 million yearly payout from the city on the interest rate swaps. These annual payments to Bank of America and UBS were a major factor in precipitating the crisis that led to Detroit’s bankruptcy filing.

In addition, there were all sorts of “termination events” built into the swaps that allowed the banks to terminate the deal while the city would still be liable for the interest projected over the 25-year term of the swaps. Among the termination events were downgrading the city’s bond rating, which occurred in 2009 and made borrowing more costly, and naming the emergency manager.

Similar interest rate swaps foisted on public entities became losing deals for many cities throughout the United States. A report published by the Service Employees union in February 2010 noted that $1.25 billion in swap payments for that year were draining the treasuries of city and state governments across the U.S. (This report can be found at detroitdebtmoratorium.org.)

Finance capital versus the people

The Moratorium NOW! Coalition to Stop Foreclosures, Evictions & Utility Shutoffs has consistently exposed how these usurious swaps — a form of predatory lending to the city treasury — were perpetrated by the same banks that destroyed Detroit’s neighborhoods and drove more than 200,000 people out of the city through their racist, subprime lending practices and subsequent foreclosures. The coalition won a Freedom of Information Act lawsuit filed in February 2013 and obtained copies of the city’s bond documents that verify this perspective.

At the court hearing on Dec. 17, municipal retiree and Moratorium NOW! activist David Sole, whose pension is now threatened, was represented by people’s attorney Jerry Goldberg. Goldberg grilled Kenneth Buckfire, the Emergency Manager’s banker, on these issues. Goldberg’s questioning and Buckfire’s responses exposed how Orr and Buckfire never for one moment considered the banks’ deliberate role and possible criminal actions in the destruction of Detroit.

In the face of this testimony, even Judge Rhodes, the same judge who approved the attack on city retirees’ pensions in the bankruptcy process, could not immediately rubber stamp the deal. (A link to Goldberg’s questioning of Buckfire can be found at preview.tinyurl.com/ltabpc8.)

At the hearing on Dec. 18, Rhodes ordered the banks and the city of Detroit to enter mediation. On Dec. 24, the banks and the city announced a new deal that reduced the swap termination fee by $35 million. But those objecting to the swap fee are continuing to fight this new deal. A continuation of the trial is scheduled for Jan. 3. Leaders of Moratorium NOW! say there will be a demonstration and pack-the-courtroom action beginning at 8:30 a.m. that day.

An article in the New York Times business section on Dec. 24 heralded this renegotiation as cracking the bankruptcy code’s special “safe harbor” for interest rate swaps. The article was accompanied by a picture of a Moratorium NOW! demonstration outside the courthouse, implicitly crediting the demonstrations for forcing the banks back to the table.

Organizers say it is the mobilization of the people, not the machinations in the courtroom, that will stop the robbery of the working class and the destruction of cities and neighborhoods by finance capital. All out Jan. 3 in Detroit to continue to press the struggle forward!