Godfrey Sithole, Philadelphia area representative of the African National Congress, led many local anti-apartheid era activists who came despite snowy weather on Dec. 14 to celebrate President Nelson Mandela’s life. Particular attention was paid to Cuba’s solidarity with the struggles of South Africa’s masses. The highlight of the event was a video of Madiba’s speech in Philadelphia in 1994, in which he thanked longtime supporters of the struggle to free South Africa, in contrast to those “who became our friends just yesterday.” 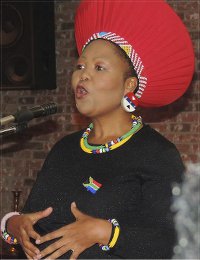 A community commemoration for Nelson Mandela organized by activists in Houston’s African-American community brought people together at the Cultural Center of the Shrine of the Black Madonna on a cold, dreary Saturday, Dec. 14. Students, elders, religious leaders, activists and veterans of the Free South Africa movement shared remembrances, analyses and love. There were no politicians, no wealthy corporate leaders, only those who held Mandela close in their hearts, those who understood the enormity of his life, his struggle and his legacy.

The warmth of the event began with two South African women singing the African National Congress national anthem, “Nkosi Sikelel’ iAfrika.” As four drummers kept a steady beat, speakers told of Mandela and his importance. Bongi Goba said: “I was born under apartheid. I had to carry a pass book. I didn’t know what the world was like outside of apartheid. However there was a name we knew in our four-room houses in the quarters in Soweto — Nelson Mandela. And we knew others, Steve Biko and South African masses who struggled and sacrificed so that apartheid no longer exists.”

The exciting spirit of the evening ended with a poem by M. Thandabantu Iverson, brought to life by local poet Hitaji Aziz. The words rang true for all present: “now that Madiba is dead … beware the icon makers … beware the speakers of phrases that lie, they will disremember liberation struggles that have yet to be won, they will pretend that Mandela belonged to them, denying the people to whom he belonged … remember to remember Chris Hani, remember to remember Robben Island … then we will remember Mandela as he was, for he will live inside us, and the lies will no longer deceive, because the struggle will continue, and the last will be first at last.”

The Rhode Island Peoples’ Assembly and its six allied organizations — The RI Rosa Parks Human Rights Committee; the RI Martin Luther King Coalition; the RI Unemployed Council; the Campaign for Work, Wages and Wellbeing; the RI SOS Save Our Schools Coalition; and the RI Council of Elders — paid their respects to the South African freedom fighter, Nelson Mandela, at a candlelight vigil on Dec. 10 in Providence. Mandela, a leader of the African National Congress, former political prisoner and first democratically elected president of South Africa, died on Dec. 5 at the age of 95. 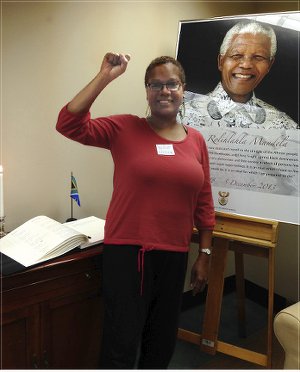 Monica Moorehead, a Workers World Party secretariat and national committee member, signed a condolences book on behalf of WWP in honor of the late Nelson Rolihlahla Mandela at the South African Mission to the United Nations. Moorehead also signed the book on behalf of the U.S. Out of Southern Africa Network, which helped to organize protests against the role of U.S. corporations such as Mobil Oil, Coca-Cola and others in propping up the then racist, apartheid regime during the mid-to-late 1980s. From Dec. 10 to 13, the Mission opened its door to allow activists to sign its book. Flowers in front of the Mission remain present despite the cold weather.