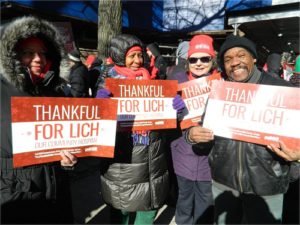 In spite of freezing temperature and strong winds, Long Island College Hospital workers and supporters had a militant noon rally on Dec. 13 across the street from this institution that has faced closing for several years. Leading the rally were members of the New York State Nurses Association whose theme was: “Be thankful for LICH.” Meanwhile, they are also conducting a toy drive for children living near the hospital who are still suffering from last year’s Hurricane Sandy.

Holding a scroll of enlarged 15,000 signatures on petitions to save the hospital, these healthcare workers chanted: “All we want for Xmas is to save our hospital!” They unscrolled these petitions along the sidewalk as speakers announced plans to fight back against the closing.

The workers are joining 1199SEIU, United Healthcare Workers East in a rally the morning of Dec. 18 to stop a bankruptcy court from closing Brooklyn’s Interfaith Medical Center in the Bedford-Stuyvesant community.

On Dec. 19, NYSNA will take the petitions to New York Gov. Andrew Cuomo’s office, where they will rally to fight against letting the 1% give LICH to realtors who are seeking to make a deal with the state.