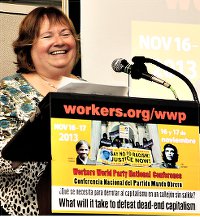 From a talk given at the 2013 WWP conference by Terri Kay.

Our Workers World Party Bay Area branch made a significant decision this year to move our office from San Francisco to downtown Oakland. This move wasn’t taken lightly, as San Francisco is “Wall Street West.” Because it is home to many foreign consulates, San Francisco has historically been the center of the northern California anti-imperialist struggle.

We joined with Occupy Oakland as this East Bay city became a national center in the militant battle against finance capital — combining the longshore port workers’ struggle with the struggle against repression — by shutting down “Wall Street on the Waterfront” with the West Coast port shutdowns. We had to be in Oakland if we wanted to be in a center of revolutionary struggle with our class. Oakland is also where the heroic battles after the murder of Oscar Grant were fought.

We fought for justice for the victims of police killings, primarily as part of the Justice for Alan Blueford Coalition. We broadened this struggle even further as outrage exploded over George Zimmerman’s not guilty verdict. After thousands burst into the streets, the Peoples Power Assembly Movement called for Justice for Trayvon Martin Assemblies on Aug. 28.

On Oct. 22, families of victims of police killings organized a large statewide rally in Sacramento. Through the JAB coalition, we promoted the demand that state Attorney General Kamala Harris prosecute these killer cops. During the march, we submitted a letter at her office, kicking off the campaign.

These cops feel empowered to shoot Black and Brown youth at will. On the day of the statewide rally, a Sonoma County sheriff killed 13-year-old Andy Lopez for walking with a toy rifle! Ever since, Latino/a youth have led demonstrations on Santa Rosa’s streets.

We also worked with other former Occupy Labor Solidarity Committee allies to form a Livable Wage Assembly. When the “Fight for $15” campaign broke out, we launched our “Fight for $15” with a big May Day march, stopping at fast-food and low-wage retail chains.

Right after the Bay Area Rapid Transit strike, port truckers, newly organized as the Port of Oakland Truckers Association, decided to strike. A Port Trucker Solidarity group was formed. Remembering the port shutdowns, Occupy involvement was requested. This group supported the truckers’ picket lines. With International Longshore Workers Union support, most terminals were shut down for the day shift, with slowdowns on the afternoon shift and the following morning.

At the Port of Oakland, the truckers are primarily Mexican, North African, Chinese and Pakistani. They work in sweatshops on wheels.

Due to historical attempts to bust the Teamsters union, these “owner-operators” are legally prohibited from unionizing. As such, they are not paid by the hour, but instead are paid by the load, which is piece work.

They are required to bear the lion’s share of payments for emissions reductions at the port, while giant terminal operators like SSA, controlled by Goldman Sachs, pay next to nothing.

This week, the truckers organized a convoy, with 70 horn-blowing trucks surrounding Oakland City Hall, as their leaders negotiated with the California Air Resources Board and Mayor Quan. Our solidarity group conducted a simultaneous demonstration. If they don’t get relief from CARB, up to 800 truckers may be jobless on Jan. 1.

These oppressed workers have created their own organization, despite laws prohibiting them from doing so. There may be another trucker strike soon if their demands aren’t met. They are fighting back.