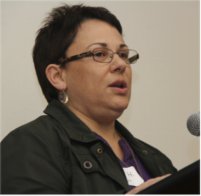 Talk given at WWP conference  on Nov. 16 by Kris Hamel.

Workers World Party wants to expropriate the expropriators and overturn capitalism, an economic system whose demise is way overdue. In this age of imperialism and endless war, low-wage and dead-end capitalism, we fight for socialism — not as some utopian dream for a far-off future — but as a necessary and realizable goal today for the liberation of humanity’s majority and the uplifting of the masses of people worldwide.

Is socialism real or just a utopian ideal? The potential for building socialism has never been greater. Technology provides the ability to coordinate production and to plan, not just on a local but on an international level.

Hospitals, schools, roads and housing could be built with breakneck speed, while we put the brakes on the destruction of the environment and climate change. Millions of workers worldwide could have jobs based on these projects.

We could immediately end hunger, feed and provide water to the people of the entire world, erase illiteracy, cure widespread diseases, house everyone.

The revolutions and attempts to build socialism, whether in the Soviet Union, China in its revolutionary period — even in Cuba and Vietnam — did not have the advantage of advanced technology. They either had to open the doors to capitalism to get that technology — with the consequence of introducing inequality or undermining the socialist base — or in Cuba, maintaining its revolutionary perspective and consciousness, but with the consequence of building socialism on a relatively low industrial basis that was heightened with the Soviet Union’s collapse.

Even under these unfavorable objective conditions, many gains were won that have never been achieved in any capitalist country, such as full employment and the elimination of homelessness. The Cuban health care system is a model for the world. There is free and universal education. East Germany was a beacon for lesbian-gay-bi-trans-queer rights and liberation.

The contradiction today is that the same technology that could liberate humanity on a socialist basis intensifies exploitation and the masses’ suffering when that technology is in the hands of the capitalist class.

Homes are being destroyed and cities blighted. School closings are rampant as finance capital holds education hostage to massive debt service imposed by the banks. Racism and national oppression are intensified and used by the ruling class as weapons to keep the working class divided and unable to fight them.

Nowhere is this truer than in Detroit — once the industrial center of the U.S., where workers, especially African-American workers, could earn relatively decent wages, benefits and pensions. Now Detroit is the poorest big city in the U.S., with child poverty well over 50 percent.

Detroit went from having the highest homeownership rate in the U.S. to the lowest today, with miles of vacant land and blighted homes due to the banks’ predatory practices. This has led to more than 100,000 foreclosures in the past decade. Our once great city lost a quarter of its population in the last 12 years.

‘The art of revolution’

The contradiction of the current period isn’t that socialism is not real and possible — but it is the objective contradiction between the ripening material conditions for a socialist transformation and the lack of revolutionary class consciousness in the working class. Overcoming that contradiction is the fundamental task of the Party and of all revolutionaries.

Leon Trotsky, a leader of the Russian Revolution, laid out a perspective on how to carry out this task in his 1938 Transitional Program: “The world political situation … is chiefly characterized by a historical crisis of the leadership of the proletariat. …

“The strategic task of the next period — a … period of agitation, propaganda and organization — consists in overcoming the contradiction between the maturity of the objective revolutionary conditions and the immaturity of the proletariat and its vanguard. … It is necessary to help the masses in the process of the daily struggle to find the bridge between present demands and the socialist program of the revolution. This bridge should include a system of transitional demands, stemming from today’s conditions and from today’s consciousness of wide layers of the working class and unalterably leading to one final conclusion: the conquest of power by the proletariat.

“… [It is necessary to put forward] a system of transitional demands, the essence of which is contained in the fact that ever more openly and decisively they will be directed against the very bases of the bourgeois regime. The old ‘minimal program’ is superseded by the transitional program, the task of which lies in systematic mobilization of the masses for the proletarian revolution.”

This is the art of revolution: how to make our program living and real and move our class in the direction of a socialist revolution.

In Detroit, we raise demands against the banks as the perpetrators and benefiters of the city’s economic crisis and destroyed neighborhoods. “Take it from the banks, not city workers!” and other slogans have evolved into an agitation and propaganda campaign that has exposed the role of the banks and the entire capitalist system in the destruction of the city and how under capitalism there are no solutions to the myriad problems facing our city.

The objective conditions for socialism are ripened and ready. But it is up to us to inject socialist ideology along with our anti-capitalist demands and help jump- start that awakening of consciousness of the mighty multinational working class.