Editor’s note: Fascist elements from the Svoboda organizations have been playing an increasingly active role in a protest movement in Kiev of the country’s wealthiest sectors, who are demanding that Ukraine orient its politics and economy toward the imperialist European Union. The following was posted online Dec. 10 at kpu.ua by the press service of the Central Committee of the Lenin Komsomol of Ukraine (Young Communists). 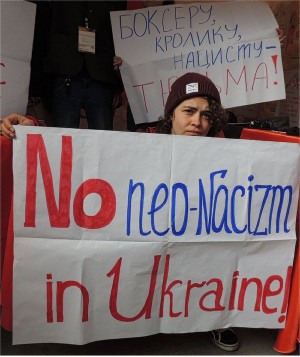 Youth in Quito say ‘No’ to neo-fascists in Ukraine.
Photo: Lenin Komsomol of Ukraine website

The 18th World Festival of Youth and Students is being held from Dec. 7 – 13 in Quito, Ecuador’s capital, which is attended by delegations from more than 110 countries.

Ukrainian youth and students, represented by the Lenin Komsomol of Ukraine (LKSMU), have brought to the youth of the world information about the incident of vandalism in the hero-city of Kiev on Dec. 8, when the fascist-vandals destroyed a monument to Vladimir Lenin.

Progressive youth of the world expressed indignation and expressed solidarity with the Ukrainian Communists and Komsomol in the struggle against neo-fascism and capitalism in Ukraine.

In this regard, the Komsomol of Ukraine held a large-scale information campaign at the Festival, highlighting the situation in Ukraine. Young people around the world willingly and actively participated in rallies called by the LKSMU to bring the neo-fascist marauders to justice.

Representatives of all countries, thousands of delegates, applauded the idea of ​​restoring the monument to Vladimir Lenin in Kiev, UNESCO World Heritage Site, and called on the whole international community to prevent the revival of neo-fascism in Ukraine, and find and punish those responsible for the vandalism.

The Ukrainian youth delegation also conducts a daily awareness campaign among delegates on the situation and the position of the Communists in solving the political crisis and social problems in Ukraine.

All delegations have a particular interest in Ukraine.

World Youth condemns the neo-fascism, vandalism and anti-communism thriving today in Ukraine. It does not carry any good for the Ukrainian people.