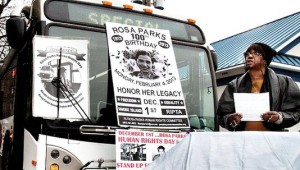 A Black Friday protest at Walmart in Providence, R.I., drew 35 people on Nov. 29. It was called by Occupy Providence and joined by members and the president of International Union of Painters and Allied Trades Local 195, members and staff of Laborers’ International Union of North America Local 271, Jobs with Justice, and the brand-new Campaign for Work, Wages and Well-being (C4W3) of the Rhode Island Peoples’ Assembly.

The Nov. 29 protest drew enthusiastic responses from passersby, who loved the idea of an “A. Philip Randolph Minimum Wage” of $15 per hour and the idea that there should be a job for all. Among those who stopped, joined in and signed up for the new campaign was Anthony, who lost his $18-per-hour job at a local manufacturing company, which closed up and sent its work overseas. He said that jobs available were paying an average of $10 an hour and that dozens of people were competing for each opening.