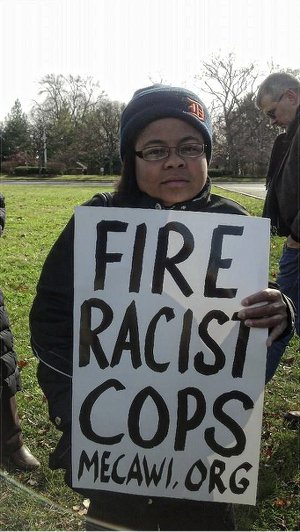 Vile racism is on the rise in metropolitan Detroit. First, there was the seemingly cold- blooded shooting death of young motorist Renisha McBride in the westside suburb of Dearborn Heights, Mich. Now, it’s reared its ugly head on the eastside in the Grosse Pointes, a series of small wealthy suburbs adjacent to Detroit. In both situations, widespread anger has ensued and protests for justice have been sparked.

At noon on Nov. 20, protesters gathered outside the Police Department at the municipal complex of Grosse Pointe Park, Mich., to demand an end to racism and racial profiling by the GPP police. Videos have come to light depicting racist cops harassing, humiliating and degrading a cognitively challenged African-American man by ordering him to sing “like a chimp” and other outrages.

Gabrielle Melton, 24, was coming out of the GPP library and came over to join the protest. She told Workers World: “On Saturday night [Nov. 16] I had seven Grosse Pointe squad cars at my house. Somehow they got inside. They made me take a breathalyzer test in my own home!” Melton is a cashier at a grocery store in Grosse Pointe. She described the racism she experiences in these eastside suburbs as “never ending.”