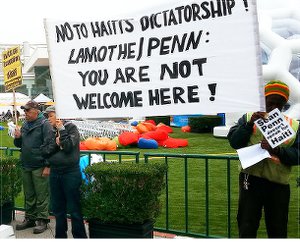 The Haiti Action Committee held a demonstration against Haitian Prime Minister Laurent Lamothe and actor Sean Penn (named “Ambassador at Large for Haiti” by President Michel Martelly), who were guests at a Salesforce.com convention in San Francisco on Nov. 19.

HAC spokesperson Pierre LaBossiere stated: “The people of Haiti are still in the midst of an occupation instigated by the United States and United Nations in 2004. As supporters of the Martelly government, which is in the process of bringing back dictatorship to Haiti, Prime Minister Lamothe and actor Sean Penn DO NOT speak in the interests of the Haitian majority.”

Demands of the Haitian majority (from the HAC flyer):

• To protest the CORRUPTION and ILLEGALITY of the Martelly/Lamothe government.

• To protest the government’s widespread repression of the poor.

• To protest the INJUSTICE of the nearly 10-year-old US/UN occupation and the suffering it inflicts on the Haitian people.

• To support the right of the Haitian majority to fully participate in the running of their country, FREE from repression and terror.

• To support the right of Haitian children, women and men, to have free access to education, food, jobs, housing and health care.

At the same time as the San Francisco protest, in Haiti thousands demonstrated against the illegitimate Martelly/Lamothe government, marking the 210th anniversary of the Battle of Vertières, one of the last battles that sealed the victory of the Haitian revolution.