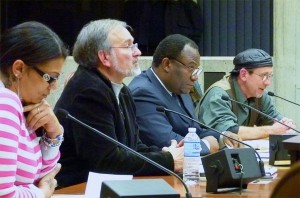 If Veolia Transportation’s union-busting crackdown on the United Steelworkers Local 8751 Boston school bus drivers’ leadership was meant to intimidate the rank and file, it is having the opposite effect.

On Oct. 8, the company locked out the drivers after they held a legally protected protest of the company’s many unfair labor practices. Since then, an escalating struggle between Veolia and the drivers’ union has awakened the membership, whose majority Haitian and Cape Verdean workers have consistently turned out in the hundreds for raucous demonstrations, meetings and job actions.

The bosses at Veolia hoped that firing four of the union’s leaders would put a chill on the union’s militant activity. However, since the firings, the numbers at these actions have only gotten bigger.

This happened once again on Nov. 21 — when 300 drivers and their supporters packed Boston City Council chambers for a hearing called to investigate Veolia’s breach of its vendor contract with the city.

Drivers sat in the aisles of the stadium-seating chamber and spilled into two overflow rooms. Boston City Councilor Charles Yancey, who called the hearing, commented that he had never seen so many people at a hearing.

Hearing recessed due to no-shows

The powerful turnout of the drivers stood in stark contrast to the absence of representatives of Veolia, Boston Public Schools and Boston’s outgoing Mayor Thomas Menino. All of them were requested to be at the hearing by Councilor Yancey and Committee Chair Councilor Felix Arroyo, but they refused to attend.

These no-shows had, of course, been plenty involved in collaborating with Veolia to attack the union. The mayor held multiple press conferences saying the union’s leaders should be fired, and BPS made multiple rounds of robo-calls, day after day, falsely warning parents of an impending strike.

But they all evidently lost their nerve when faced with the prospect of sitting in a hearing across from hundreds of school bus drivers and their supporters from throughout the community.

Their absence did not go unnoticed by the elected officials who did attend the hearing — they included all Boston City Council members of color.

“I do not accept this letter,” said Councilor Tito Jackson, gesturing to the mayor’s letter explaining why he wasn’t attending.

The failure of city officials and Veolia reps to attend added to the political momentum of the evening, which put the company and its city collaborators further on the defensive in the struggle to reinstate the fired leadership of the union.

In a show of support for the drivers, Yancey pointedly did not close the meeting, but recessed it. This signaled that the council’s investigation into Veolia’s contract with the city would continue — and so would pressure on the bosses, BPS and the mayor to show up at future meetings.

Union members and supporters speak out

Holding up large posters of Veolia executives locking the gates of the Freeport and Readville bus yards on Oct. 8, drivers used the hearing to ask key questions: Why was the notorious union-busting firm Veolia awarded the school bus contract by the city when its bid was not the lowest, as required by state law? And who gave the order to lock out the drivers on Oct. 8?

One driver, Kiette Woody Baptiste, testified that Veolia switched the union’s disability insurance carrier, which had different policy terms. She was supposed to be out on disability, but the switch reduced her payments and forced her to get back behind the wheel while in pain.

What also came out at the hearing was Veolia’s constant violations of the contract. Union Vice President and Benefits Administrator Steve Gillis — one of the fired drivers — told the committee how violations by Veolia started the day after the notorious union-busting firm signed the contract.

These violations included attempts to reduce the drivers’ base pay by linking it to a GPS system and demanding that the workers reapply for their jobs.

Veolia’s track record became a focus of the hearing in the public comments’ section. Speakers took to the mike to detail Veolia’s crimes in propping up illegal settlements in occupied Palestine; its privatization of water services that results in high rates and cutting corners on safety; and the high rate of cities, like St. Louis and Detroit, that have rejected the company due to its terrible profits-before-people management of essential services.

Many Boston residents voiced staunch support for the school bus drivers’ union, calling attention to its history as a union that fights not only for its members but for the community as well. The union has been active in anti-war demonstrations, the lesbian-gay-bi-trans-queer movement, Occupy encampments and the fight against the racist resegregation of Boston schools.

Sandra MacIntosh, of the Coalition for Equal Quality Education, described how the union had played an active role in the fight to stop school closings and the various “zone plans” that were meant to dismantle busing.

This past March the BPS adopted a plan to return to racist, segregated neighborhood schools over opposition from the community. Billboards throughout Boston are playing a central role in promoting this scheme. Who is paying for them? Veolia Transportation.