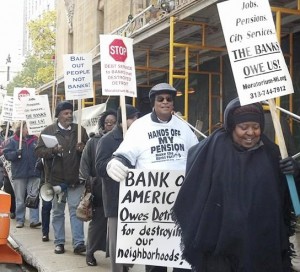 In the struggle to stop the racist bankruptcy and emergency management imposed by the big banks on the city of Detroit, pickets chanted outside the downtown headquarters of Bank of America at lunchtime on Nov. 12.

They targeted the financial giant because of its role — along with United Bank of Switzerland and the London-based Barclays — in what activists call an “additional $350 million robbery by the banks of municipal retirees and Detroit residents.” Most of this money will go to pay a termination fee on a “nefarious interest rate swap.” Some $230 million will go directly to the profit coffers of BoA and UBS. Barclays, of LIBOR scandal infamy, is brokering the deal.

Several UBS and BoA executives have recently been found guilty and sentenced to prison terms for fraud in connection with municipal bonds.

Two days after the protest, on Nov. 14, Bankruptcy Judge Steven Rhodes sided with people’s attorney Jerome Goldberg and denied an outrageous motion made by the emergency manager and the banks to keep secret the huge fees they will make from the deal. Barclays even reportedly flew in a barrister from London to appear at the hearing in the federal court.

Goldberg successfully argued that under the Michigan Freedom of Information Act, the fee agreement must be disclosed. A Detroit Free Press article called the ruling “a win for [municipal] unions.” (freep.com, Nov. 14)

Goldberg told Workers World, “The interest rate swap agreement, if approved by the court, will cost Detroiters 20 percent of their city income taxes, or $4 million per month for the first six years after conclusion of the bankruptcy. It should be the other way around. The banks owe Detroit for destroying our city with their predatory lending and massive foreclosures.”

A trial on the issue of the $350 million termination fee agreement will begin on Dec. 10. Organizers with the Moratorium NOW! Coalition to Stop Foreclosures, Evictions & Utility Shutoffs are planning a major demonstration outside the courthouse on that date. The coalition is demanding a cancellation of the city’s debt to the criminal banks.