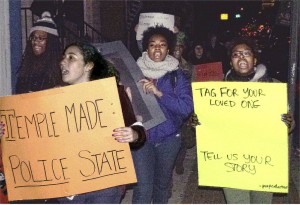 Temple University students and supporters gathered Nov. 4 for a rally against police brutality in response to recent beatings and assaults by campus police and Philadelphia cops. The organization People Utilizing Real Power called the action to encourage people to speak out against brutality in order to protect their communities.

The rally on Temple’s north Philadelphia campus was surrounded by signs of rapidly encroaching gentrification. Numerous “luxury apartment” and newly constructed high-rise student housing units have pushed out longtime residents, who are mainly poor and Black.

Opening the rally, PURP organizer Kashara White said: “We [PURP] are revolutionaries, we are not reactionaries, and we are not reformists. … We struggle for Black liberation, for women’s liberation, for queer liberation and against gentrification, capitalism, colonialism, imperialism and for self determination for all oppressed people. … It’s time to unite our struggles.”

Sarah Giskin reported: “Twenty-three people have been killed or wounded by Philadelphia police in the first six months of 2013. Complaints by victims in all cases are still pending or were denied by the district attorney. No charges were filed against officers who fired on civilians.”

Sabrina Sample described how she and a friend were victimized by police a few weeks ago just blocks from the rally site, saying that the Temple and Philadelphia cops “have launched a war against the citizens of this north Philadelphia community.” She called the cops “gang members with badges.”

Standing by a photo enlargement displaying the bodily damage he sustained from a beating by Temple University police, Ian Lewis, who missed finals and was handcuffed to a hospital bed for eight hours, said his experience left him feeling the need to learn what was behind the police actions. He compared the police to the overseers working for slave owners. “The police officers are dependent on the system. They follow their orders like pawns are supposed to.”

Activist attorney Michael Coard commented on how by working together people can have power over the police. He urged everyone to download the app found at ACLU-NJ.org explaining: “This website lets you video any contact with police. Even if police take your phone or destroy it, the ACLU has a record.”

Explaining that this was his first rally, Kenny Sullivan described being locked up by police after a confrontation at his high school. “Being empowered by each other is the only way to further the struggle,” Sullivan told the crowd, concluding, “I’m feeling rallied up.”

The rally was followed by a march to the nearest Philadelphia police station, at 17th Street and Montgomery Avenue, where demonstrators held a spirited picket line.

PURP is determined to continue to broaden the struggle. Sabrina Sample told Workers World: “Our issues of interest are the school to prison pipeline, mass incarceration, gentrification, police brutality and many others. Our goals are to mobilize the power of marginalized and socially conscious youth as well as raising consciousness in the communities most affected by the ills of modern capitalism.”