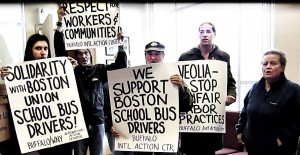 Boston’s school bus drivers’ union, Steelworkers Local 8751, continues to garner support from parents, unions and community leaders in the face of an ongoing attack by the multinational conglomerate Veolia against the union and its leaders.

The USW International legal team has launched a full-scale campaign to defend the fired leaders, including filing unfair labor practice charges against Veolia and aggressively pursuing grievance and arbitration, as per the contract. The campaign has also involved the full participation of the International and the Local’s membership at every step in the process. The legal team filed for unemployment benefits for the four fired workers based on “discharge without just cause.” In addition, the International has demanded a high-level meeting with Veolia to call for the immediate reinstatement of the four.

Veolia has been working overtime in an attempt to divide the militant union’s rank and file from these leaders ever since the company illegally locked out the workers on Oct. 8, following a work stoppage that day to demand that Veolia address the union’s grievances. These attempts have spectacularly failed, however, and the union stands strong and undivided.

Undeterred by an onslaught of anti-union propaganda by the city, the mayor, the Boston Public School system and the entire corporate media establishment, the larger community in Boston and even international allies have come out to support the SBU5 in various ways. Solidarity statements have been issued by the San Francisco Labor Council, Amalgamated Transit Union Local 1181 in New York and Sinaltrainal, the bottler’s union in Colombia. The International Brotherhood of Electrical Workers Local 2222 donated their offices to serve as the official headquarters of the Labor Committee to Defend the School Bus Union 5.

In the past week, members of the Black Educator’s Alliance of Massachusetts staffed the Local 1181 office, phonebanking their members  to invite them to a major rally in support of the union on Nov. 9 (see accompanying article). The organization, along with the Coalition for Equal Quality Education, is holding an important parents’ summit on Nov. 13 in solidarity with the SBU5.

Actions by communities and labor in support of Local 8751 are in recognition of the union’s long-standing militancy against racism and in support of labor around the world. The union was at the forefront of the struggle to desegregate Boston schools from the time of its founding in 1974, and has fought hard against recent racist attempts towards resegregation. The union has always maintained constant contact and dialogue with Boston’s parents, as its members safely transport Boston’s youth to and from school each day.

Boston City Councilor Charles Yancey has ordered the City Council to hold a hearing to investigate Veolia and its violations of the company’s contract with the school bus drivers.

WHEREAS: The Boston School Bus Drivers are hard-working women and men, the overwhelming majority of whom are from Boston’s communities of color, and they have a decades-long and proud record of providing safe, professional, on-time service to the students and parents of Boston; and

WHEREAS: USW 8751 has a well-earned reputation for solidarity and activism with the educational community of Boston. …

WHEREAS: USW Local 8751 has provided Labor Solidarity in Action for workers throughout the city, the region, and in fact throughout the globe, from the Verizon telephone workers, to Colombian, Venezuelan and Haitian unions, to the NYC school bus workers, to workers in West Bengal, India. The charges currently filed against Local 8751’s leaders by Veolia Transportation specifically seek to punish the 5 for their solidarity actions; and …

WHEREAS: The five threatened with termination, the School Bus Union 5, are collectively responsible for retirement, enforcement of benefits, civil rights on the job, grievance and arbitration processing from the first step of writing through arbitration advocacy, and the first line of defense of the contract on behalf of the rank and file; and …

WHEREAS: Veolia Transportation has committed numerous unfair labor practices and failed to respect the role of the union as the employees’ exclusive representative; Therefore Be It

ORDERED: That the appropriate committee of the Boston City Council holds a public hearing to investigate the actions of Veolia Transportation, Boston Public Schools and Mayor Thomas Menino in the illegal lockout of the school bus drivers as well as allegations included in the Unfair Labor Practice charges now being heard before the National Labor Relations Board to determine if Veolia Transportation is in breach of its vendor contract with the City of Boston; and Be It Further

ORDERED: That representatives of Boston Public Schools, Veolia Transportation, the National Labor Relations Board, the Menino Administration and members of the public be invited to attend.

For more information on this ­struggle, visit bostonschoolbus5.org and workers.org.