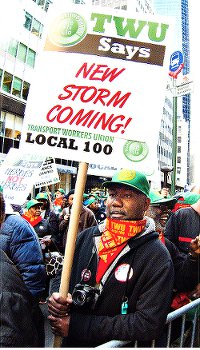 More than 4,000 people — mainly members of Transport Workers Union Local 100 — protested in front of the Metropolitan Transportation Authority’s office at 2 Broadway on Oct. 29.

That date was the one-year anniversary of superstorm Sandy hitting New York City and seriously impacting New York’s transit system. The hard work, skills and deep experience of New York’s transit workers was what got this system — so vital to the functioning of the whole city — up and running in a few days after the storm.

The 300,000 or so city workers, all without a contract — some for years — want a raise. They also want the normal “retro” payments covering the months or years since their last contract expired.

The MTA, in a move that prefigures other offers to city workers, presented a three-year contract with no raises, more employee contributions for medical care and many other givebacks.

This is how labor negotiations have worked for decades in New York City.

“There’s no way that the transit workers, in light of the work we’ve done historically and the work we do day in and day out, are taking three zeros, or any of those other … concessions that they’re demanding of us,” said John Samuelsen, president of TWU Local 100.