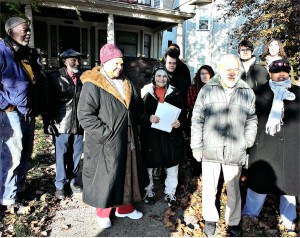 Members of the Carl Stokes Brigade, Black on Black Crime, Affordable Housing Centers of America, Peoples Fightback Center and Oberlin Student Labor Action Coalition faced down Cuyahoga County deputy sheriffs on Oct. 29 and won a 60- to 90-day reprieve in the foreclosure and eviction process for longtime activists Dave and Marva Patterson in the historic Hough neighborhood of Cleveland.

The Pattersons were able to point out fraudulent aspects of the documents being served by the deputies. They also insisted that a bank representative be present, as legally required, rather than the Howard Hanna realtor who falsely claimed to represent the bank. Deputies had the nerve to ask for city of Cleveland identification from City Councilperson T.J. Dow, who was mediating the dispute.