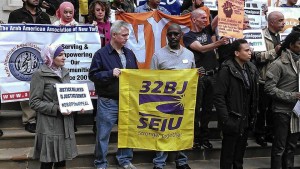 People representing groups participating in the Communities United for Police Reform coalition held a rally and news conference on the steps of New York City Hall on Nov. 6. They called on the city of New York to drop its appeal of a court ruling in the Floyd case that struck down parts of the New York Police Department’s infamous stop-and-frisk racial profiling policy.

On Oct. 30, the Federal Court of Appeals for the Second Circuit granted the city a delay in implementing remedies to the stop-and-frisk policy ordered by Judge Shira Scheindlin pending the appeal. It also stripped the case from Scheindlin after she came under heavy attack from Bloomberg, Police Commissioner Ray Kelly and the media.

Either Bloomberg or, after Jan. 1, de Blasio could drop the appeal and order the NYPD to comply with the judge’s ruling.

The case has national implications, with stop-and-frisk or similar policies being implemented in several other major cities, including Philadelphia and Oakland.

The Center for Constitutional Rights, whose attorneys led the Floyd case, has called on people to demand that Mayor-elect Bill de Blasio drop the appeal of the verdict in the stop-and-frisk trial.