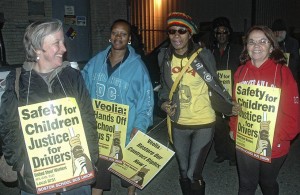 Nov. 4 — The notorious Veolia Corporation fired two leaders of Steelworkers Local 8751 on Nov 1. “You are discharged, effective immediately” read the letters to Grievance Chair Stevan Kirschbaum and Vice President Steve Gillis. Three other members of the Boston School Bus Union 5 — Recording Secretary Andre ­Francois and Stewards Garry Murchison and Richard Lynch — have also been suspended and threatened with firing. They are known collectively as the School Bus Union 5 (SBU 5).

The struggle to put a halt to the company’s union busting, however, has not only not been defeated, but the fightback movement is growing larger and kicking into high gear.

Among other events, the USW International and Local 8751 are calling for a mass Solidarity Day rally for the School Bus Union 5 on Sat., Nov. 9, at Veolia Transportation’s Executive Offices in Boston. Supporters are gathering at the intersection of Dorchester Avenue and Hoyt Street in Dorchester at 1 p.m.

Reaction to the firings by workers and the community was swift and extraordinary. Within hours, over 150 rank-and-file bus drivers, monitors and supporters spontaneously turned out at an impromptu meeting at Hibernian Hall in Roxbury an hour before a scheduled film showing of “Mumia Abu-Jamal: Long Distance Revolutionary.” Half of the workers stayed to hear Andre Francois help introduce the film about political prisoner Mumia Abu-Jamal’s struggle against the death penalty and subsequent life sentence for a crime he did not commit.

That was followed on Nov. 2 with an overflow crowd of 100 workers at an emergency organizers meeting of Team Solidarity, a rank-and-file organization of school bus union workers from throughout the region.

Chuck Turner, former city councilor released from prison and house arrest Nov. 1 after a politically motivated frame-up, who is a beloved 40-year veteran of the struggle for equality and justice in Boston, told the crowd of mainly Haitian and African-American workers and labor activists that the workers’ struggle for the SBU 5 is not only a “critical battle to defend their local against union busting and to defend their leaders, but it represents the hope, the fightback spirit and inspiration critical to the future of Boston’s Black community.”

The Nov. 9 mobilization will provide an opportunity for community, political and labor activists to show their opposition to union busting and support for the SBU 5. The USW International leadership and Team Solidarity have garnered organizational support from the Massachusetts State AFL-CIO, the Greater Boston Labor Council and a broad coalition of labor and community groups for the rally at the gates outside Veolia’s corporate office.

International Brotherhood of Electrical Workers Local 2222 Business Manager and Financial Secretary Myles Calvey has endorsed the rally and pledged to turn out that membership. He has even offered his union hall as the headquarters for Labor to Defend the School Bus Union 5.

New York City’s Amalgamated Transport Union Local 1181-1061 is organizing a busload of labor and community activists to attend the rally, including members of Parents to Improve School Transportation (PIST), a strong ally of ATU 1181.

A video of USW 8751’s solidarity tour last February to support the 8,800 striking ATU 1181 school bus workers was presented as “evidence” against the leaders during Veolia’s disciplinary hearings. However, the solidarity trip had nothing to do with the events of Oct. 8, which are the basis for the firings and suspensions. So using the video as part of the legal charges not only exposed the true political character of Veolia’s campaign, but motivated the ATU local to call their School Bus Workers Union Solidarity Caravan from NY to the Nov. 9 Boston rally.

Local 1181 strike leader and rank-and-file activist Maria Gentile’s message to her local members includes, “Our Boston brothers were down here when we needed them. Remember whatever happens to them happens to us. We are all union brothers and sisters, and we can’t let the greedy corporate monsters destroy our unions!”

Michael Cordielo, president of Local 1181-1061, wrote a solidarity letter on Oct. 25 in which he states: “This union busting by Veolia Transportation is outrageous. Solidarity is not a crime. Standing up with the members for their rights is not a crime. All of labor needs to stand up and say, ‘We will join ranks to ensure that Veolia’s crimes will not succeed, in Boston or any of its worldwide operations.’ ”

Charles Yancey, the long-time African-American Boston City Councilor, filed a hearing order on Nov. 4 at the Boston City Council calling for an investigation into Veolia’s labor practices in the city of Boston. The proposed city order specifies:

“That the appropriate committee of the Boston City Council holds a public hearing to investigate the actions of Veolia Transportation, Boston Public Schools, and Mayor Thomas Menino in the illegal lockout of the school bus drivers as well as allegations included in the unfair labor practices charges now being heard before the National Labor Relations Board to determine if Veolia Transportation is in breach of its vendor contract with the City of Boston; and Be It Further Ordered:

“That representatives of Boston Public Schools, Veolia Transportation, the National Labor Relations Board, the Menino Administration, and members of the public shall be invited to attend.”

The date of the hearing will be announced when it has been scheduled.

Since day one of taking over the Boston school bus management contract on July 1, 2013, Veolia has committed numerous unfair labor practices and violated nearly every term and condition in the union’s employment contract, resulting in massive and chronic payroll shortages, denial of contractually mandated benefits and a relentless campaign to destroy 38 years of collective bargaining progress.

In the process, Veolia has sacrificed student safety on the altar of profit by, among other things, creating routes designed by GPS-based software that result in massive lateness to school and to home.

On Oct. 8, drivers engaged in a legally protected protest of Veolia’s unfair labor practices, merely requesting their right to a meeting with the company to demand Veolia honor the contract. Instead of granting the meeting, Veolia wrongly called the police, forcibly removed the drivers and initiated an illegal lockout in violation of the contract and federal law. Boston Mayor Menino and Veolia then targeted the five officers of Local 8751 for termination. Over the last two weeks, hundreds of members of 8751 and supporters have come out to three separate disciplinary hearings on October 23, 28 and 31 and attended almost daily organizing meetings at the Team Solidarity office in the Jamaica Plains section of Boston.

The evening before the termination letters were delivered, more than 300 bus drivers and other activists chanted to the beat of Haitian drumming, which could be heard at the third disciplinary hearing in Veolia’s corporate offices. Though the hearing was supposed to represent a fair and thorough investigation into the events of Oct. 8, it was far from that (see accompanying article on the legal aspects of the case against the Five).

More than 500 witnesses signed a mass affidavit to testify for the Five but were never given that opportunity. Veolia officials abruptly decided to put an end to the hearings on Halloween night.

After the hearing broke up, Kirschbaum reported from the pickup truck used as a stage that “This union’s members are like family, and we stick together; that’s the way we roll.” Union members surrounded and yelled at company officials as three cars dared to drive through the rally. The crowd ended the rally with a rousing, rhythmic rendition of the time-honored union anthem, “We’re Gonna Roll the Union On.”

Local 8751, with 800 school bus drivers, mainly immigrant workers from Haiti and Cape Verde, has a long history of involvement in community issues and solidarity activities. The local has been involved in the struggle of African-American and other oppressed communities for equal education since the desegregation of Boston’s schools in 1974.

That spirit continues today with the local’s involvement in such educational organizations as the Coalition for Equal Quality Education and the Black Educators Association of Massachusetts, which are engaged in the fight against school closings, cutbacks and privatized charter schools. The local sees these attacks on public education as part of the larger plan to resegregate Boston Public Schools. Included in that is Veolia’s attempt to decimate USW 8751.

Workers’ side vs. Veolia lies

Veolia Transportation has waged a relentless disinformation, slander campaign against the union and its leaders. Local politicians such as the mayor, with the connivance of the mainstream media, have helped Veolia’s anti-labor campaign. Since Oct. 8, BPS authorities has repeatedly misinformed and inconvenienced parents with fear-mongering warnings about daily threatened bus strikes that failed to materialize. On the evening of Oct. 30 before the last disciplinary hearing, one mayoral-funded agency circulated a flier warning parents in Dorchester that a wildcat strike would take place on Oct. 31. This never happened.

Labor activists say Veolia, not the workers, is at fault for refusing to meet with the bus drivers, who were willing to work on Oct. 8, and instead locked them out. Meanwhile, the workers’ side of the conflict has not been given a fair hearing, especially in the corporate and local press.

Kirschbaum, Gillis and other union officers have still not been interviewed by National Labor Relations Board staff about the unfair labor practice charges filed by the USW in September against Veolia. The charges list 15 complaints, including unsafe and overcrowded bus routes, pay shortages, mismanaged benefits, and nonpayment of wages.

Solidarity messages have been received from many national labor, community and political organizations, including PIST in New York City, NYC’s Amalgamated Transport Union Local 1181-1061, and San Francisco school bus drivers in United Transportation Union Local 7141. International solidarity messages have been received from the Communist League of Finland; Edgar L. Sarango Correa, president of the Workers Confederation of Ecuador and current president of the Workers Unitary Front; and Edgar Páez on behalf of the national leadership of the National Union of Food Workers (SINALTRAINAL) of Colombia. Solidarity messages can be sent to [email protected]

For more information, see the Team Solidarity facebook page at tinyurl.com/d5tntcg or http://bostonschoolbus5.org.