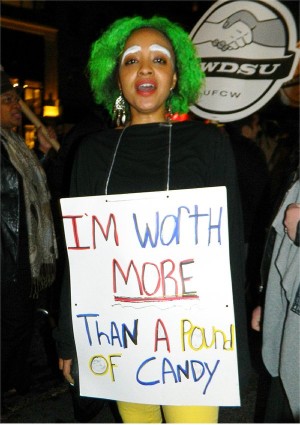 New York, Oct. 30 — With the Rude Mechanical Orchestra providing noisy and spirited support, dozens of activists picketed Dylan’s Candy Bar store on Manhattan’s East Side tonight. Many wore Halloween costumes and carried signs that said, “I’m not a sucker,” as this candy store boss, Dylan Lauren — Ralph Lauren’s daughter — was exposed for being worth more than $4 billion. Meanwhile, Dylan’s workers are demanding fairness, dignity and a living wage.

Hundreds of colorful fliers were distributed by activists all around the two-story store. They answered questions from passersby who wanted to know what was behind the protest.

These Dylan’s workers are organizing with the Retail, Wholesale and Department Store Union to win living wages. They are demanding increased pay to $13.99 per hour — the price of 1 pound of bulk candy; just hours with more stable scheduling and guaranteed hours for all workers; and an end to favoritism.