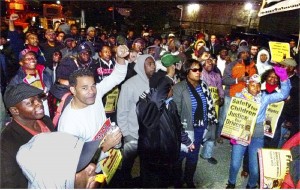 Boston, Oct. 28 — It was a true indication of what workers’ power means. A mass outpouring of workers at an hours-long rally tonight served notice to the notorious, union-busting transnational corporation, Veolia, that rank-and-file members of Steelworkers Local 8751, the Boston School Bus Drivers Union, stand prepared to defend their leaders and union by any means necessary.

As the speeches, chants and drumming penetrated the hearing, the Veolia bosses were forced to initiate a stay on imposing any discipline against the Five — until a third hearing, scheduled to take place on Oct. 31 at 3 p.m.

No one had to be convinced that the bosses are dragging out the hearings in hopes that the union will tire of mobilizing in support of the Five.

The first hearing, on Oct. 23, had ignited the bus drivers and their supporters to rally against the fabricated charges brought against their leaders.

Team Solidarity — the voice of a rank-and-file coalition of school bus drivers from the Steelworkers, Teamsters and Amalgamated Transport unions — said in a public statement on Oct. 28: “Since taking over the Boston school bus management contract on July 1, 2013, Veolia has committed numerous unfair labor practices, violated nearly every term and condition of the drivers’ employment contract, and engaged in actions designed to steal literally millions of dollars from drivers’ paychecks — all with the goal of attempting to decimate this union of mainly Haitian and Cape Verdean drivers.

“In the process, Veolia has sacrificed student safety on the altar of profit, among other things creating routes designed by GPS-based software that result in massive lateness to school and to home, and refusing to pay drivers for all their time worked.

“On Oct. 8, when drivers engaged in a legally protected protest of Veolia’s unfair labor practices, including refusing to meet at the drivers’ repeated requests, Veolia wrongly called the police and forcibly removed the drivers, illegally locking the gates and refusing to let the drivers back in to work. Boston Mayor Menino and Veolia then targeted the five union leaders for termination. Boston School Bus Drivers Union Local 8751 exemplifies what a labor union should be.”

As the five sat in the disciplinary hearing, held at Veolia’s corporate headquarters in the Freeport yard, bus drivers and their supporters started to gather in the early afternoon. They kept coming until the evening, when bus runs taking children home from school ended.

A truck was transformed into a makeshift stage. When there were breaks in the hearing, the Five came out and stood together in solidarity, giving words of encouragement and brief updates on what had happened.

One of the speakers early in the day was Myles Calvey, a leader of the International Brotherhood of Electrical Workers 2222, representing Verizon workers. Calvey spoke of the long-time relationship between his union and USW Local 8751 and the need for all workers to stick together.

Other speakers included out-of-town supporters Sharon Black from the Baltimore Workers Assembly and Eva Panjwani and Scott Williams, representing the youth group Fight Imperialism, Stand Together (FIST) from Durham, N.C., and Philadelphia, respectively. Black and Panjwani spoke on recent solidarity actions for the Boston drivers held at Veolia offices in their cities. Similar demonstrations took place in New York, Buffalo and Oakland. An action is scheduled for San Francisco on Oct. 30.

Miya Campbell from the Women’s Fightback Network compared the bus drivers’ struggle to the heroic anti-apartheid fight led by women.

Ed Childs, a member of UNITE HERE Local 26, spoke on the history of racist segregation in Boston and the struggle to organize against Veolia and reactionary political forces that want to turn back the clock to resegregate the schools.

‘Solidarity is not a crime’

While there was a virtual occupation of the Veolia headquarters during the first disciplinary hearing on Oct. 23, today’s rally was also an occupation but even more spirited and militant. The Five marched out of the hearings, united as one, to powerful cheers and fist pumps of hundreds of rank-and-file members and their supporters. They took the stage to make short statements, urging the membership to stay strong and united. Three women union leaders — Kiett Woody Baptiste, Chantell Casimir and Lela Roseboro — spoke in passionate defense of the Five and their union. Pat Scanlan spoke on behalf of the local chapter of Veterans for Peace.

Sandra McIntosh, coordinator of the Coalition for Equal Quality Education, speaking on behalf of the parents and students, extended solidarity to the union from the Black Educators Alliance of Massachusetts. She told the crowd: “You are the most important people in my world because you carry the most important cargo in the world — our children. We give you our children and you bring them back to us each and every day. You deserve the respect, the pay and the solidarity you have coming to you. We are here from the community to support you.”

Larry Holmes, from the New York People’s Power Assembly and Workers World Party, told the drivers that they were an inspiration to all workers. He also sent a message to Veolia that “You will not bust us.” He ended his talk with a chant picked up by the entire rally: “What’s disgusting? Union busting!”

Stevan Kirschbaum, who co-chaired the rally, along with Team Solidarity leader and USW Local 8751 member Frantz Mendes, announced that two solidarity messages had come from Latin America — one from Edgar L. Sarango Correa, president of the Workers Confederation of Ecuador and current president of the Workers Unitary Front; the other from Edgar Páez, part of the national leadership of the National Union of Food Workers (SINALTRAINAL) of Colombia.

From the stage Kirschbaum recognized a delegation of Team Solidarity bus workers from Brockton Teamsters 653, as well as the entire negotiating committee representing school bus workers employed by the Eastern Bus Company.

He also brought to everyone’s attention solidarity from New York’s Amalgamated Transport Union Local 1181. In a vicious anti-union attack, Veolia has included in its “evidence” being used to “prove” the case for the termination of leaders, a video of USW 8751’s solidarity tour to support the 8,800 striking NY school bus workers last February. The act exposes the true political character of Veolia’s campaign to punish this militant union for daring to provide real solidarity in action.

In a statement release by Michael Cordiello, ATU 1181 President and Business Agent, the union states: “This union-busting action by Veolia Transportation is outrageous. Solidarity is not a crime. Standing up with the members’ for their rights is not a crime. We will join ranks to ensure that Veolia’s crime will not succeed, in Boston or any of its world-wide operations. Veolia: Hands off the Boston School Bus Union 5.”

Linda Jenkins from the Community Church of Boston was also greeted from the stage.

As outreach continues to grow in the community and the political movement for round three of the hearings set for Oct. 31, the bus drivers are fully aware of and prepared for the ongoing struggle to defend their union and the rights of all workers.

Charles Yancey, an African-American Boston City Councilor, informed USW 8751 Oct. 29 that he is preparing a City Council order demanding a hearing to investigate the actions of Veolia, BPS and Mayor Menino in the illegal lockout of the school bus drivers as well as allegations included in the unfair labor practices charges now being heard before the National Labor Relations Board to determine if Veolia is in breach of their vendor contract with the city.

On Oct. 8, Yancey went to Veolia’s corporate headquarters to demand that the company meet with the drivers so that they may return to pick up the students. He was rudely ordered from Veolia’s corporate office and physically escorted from the property by Boston police.