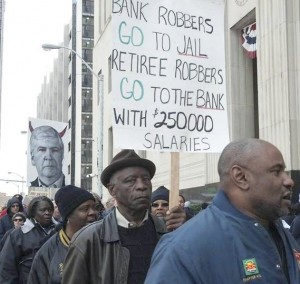 Oct. 28 — Detroit residents, workers and retirees have been protesting and assembling on an almost daily basis to resist the undemocratic and racist takeover of the city by Emergency Manager Kevyn Orr and his bankruptcy filing on behalf of the big banks. With the Chapter 9 municipal bankruptcy eligibility trial in full swing in U.S. Bankruptcy Court in downtown Detroit, activists are pointing out that these banks will profit greatly from the city’s fiscal crisis, a crisis caused in large measure by these very banks because of their predatory lending that led to massive home foreclosures.

Orr was appointed by Michigan’s reactionary Republican Gov. Rick Snyder, who testified in the bankruptcy trial Oct. 28. Outside, hundreds picketed at a noon action called by National Action Network-Detroit. It was attended by activists from the Moratorium NOW! Coalition to Stop Foreclosures, Evictions & Utility Shutoffs as well as city retirees, youth, unionists and other activists.

Inside the court, lawyers and witnesses claiming to represent the “city,” but really representing the banks, argued for bankruptcy. This would allow the banks to reap a maximum return on the city’s “debt” — money that would be taken from residents, workers, retirees and the assets of the city of Detroit.

It is illegal under the Michigan state constitution to seize workers’ pension funds, but that is just what Snyder and Orr, at the behest of the banks, are trying to do.

16 cents on the dollar and other outrages

Orr’s chief financial advisor, Kenneth Buckfire, testified at the trial on Oct. 25 that the Emergency Manager’s plan would pay city of Detroit pensioners — who number about 23,500 — only 16 cents on the dollar, the same as any unsecured creditor. (Reuters, Oct. 25) The city, under emergency management, claims that about half of its alleged debt is owed to workers’ pensions and retiree benefits.

As secured creditors, however, the banks would get a guaranteed 80 cents on the dollar.

On the eve of the bankruptcy trial, and totally unnecessarily, Orr announced a loan of $350 million was needed in “emergency financing” — not to back up workers’ pensions, but to pay Bank of America and United Bank of Switzerland on interest rate swaps. These tricky and fraudulent transactions have already netted these banks more than $250 million in profit on deals where the interest rates the city paid the banks were 1,200 percent higher than what would have been owed on bonds they replaced!

The emergency loan to pay off BoA and UBS is backed up by a first lien on income tax dollars received by the city and any city asset worth more than $10 million. While the Detroit City Council voted down this swindle, the Snyder/Orr clique seems bent on moving forward with the deal in order to satisfy the banks.

“It is ironic,” noted an Oct. 28 statement by Moratorium NOW!, “that the same week that Snyder/Orr and their gang of looters testified to their intent to destroy workers’ pensions to pay off the banks, which just so happen to be Jones Day [EM Orr’s ‘former’ law firm] clients, the federal government announced that the banks owed the people of the U.S. billions of dollars for the mortgage fraud they perpetrated, and forced JPMorgan Chase to repay $13 billion.”

Banks should be criminally investigated

In large part because of the exposure by Moratorium NOW! of the banks’ role in the destruction of the city, and the group’s demands for cancellation of the city’s debt and reparations by the banks, more and more activists are visibly and vocally raising these demands.

City of Detroit retired workers have written to the federal Securities and Exchange Commission asking that the SEC intervene in the Detroit bankruptcy proceedings in order to initiate a proper investigation of possible “fraudulent, predatory and criminal actions” on the part of the banks involved.

“While we are told our pensions are unsecured and must be sacrificed to pay off the banks,” stated the retirees’ letter, “we believe a thorough examination of the banks themselves, in the mortgage crisis which destroyed Detroit’s tax base and then the many bond sways to the City government, very well might undermine the claims of the banks to take precedence over our pensions. Only the SEC can fully expose the breadth of bank misconduct. [The bankruptcy judge] needs to hear this critical information.”

The SEC responded that they don’t intervene in “private” bankruptcies. Activists are demanding the SEC read their letter and provide a serious response.

On the morning of Oct. 23, as the bankruptcy eligibility trial began, the federal courthouse was surrounded by more than 1,000 protesters, including residents, workers, retirees, unionists, students, youth, faith people and other activists.

“Hands off our pensions! Make the banks pay!” and “Whose city? Our city!” were among the chants as the overflow protest took the entire street in front of the courthouse. Probably the largest numbers were from the American Federation of State, County and Municipal Employees Union, including many city of Detroit retirees. The United Auto Workers had a large presence, as did union firefighters and members of the International Brotherhood of Electrical Workers, the Detroit Federation of Teachers, UNITE HERE, and the postal workers’ unions, among others.

A high point was the arrival of the Occupy Wall Street delegation, which came in solidarity on a bus from New York City. This multinational contingent marched in with a large banner, chanting, “We are the 99 percent!” while the crowd cheered and joined in. Later, OWS members helped lead a march around the courthouse, which Homeland Security cops were unable to stop, much to their chagrin.

The protest was organized by a coalition of Moratorium NOW!, Detroiters Resisting Emergency Management, and other activists, and was supported by AFSCME Council 25.

“Defend retiree pensions and benefits, not one penny to the banksters!” is the battle cry as activists gear up to stop the looting of Detroit by the banks and their politicians. Moratorium NOW! organizers say they plan to escalate the fight by going directly to the doors of the culprit banks and engaging in other struggle tactics.

After testimony on Oct. 29, Bankruptcy Judge Steven Rhodes will adjourn the trial until Nov. 4.