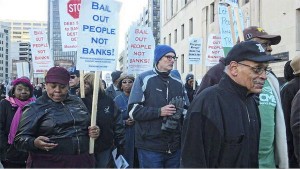 Oct. 24 — The federal courthouse in downtown Detroit was surrounded by more than 1,000 defiant protesters the morning of Oct. 23 as the Chapter 9 municipal bankruptcy eligibility trial began in U.S. Bankruptcy Court. Residents, workers, retirees, students, youth, faith people and activists came out to say “No” to the city bankruptcy, “No” to the racist, anti-democratic emergency manager who filed for the bankruptcy, and “No” to the banks, who are the only ones profiting in the situation.

“Hands off our pensions! Make the banks pay! and “Whose city? Our city!” were among the chants echoing off the building as the overflow protest took the entire street in front of the courthouse. Probably the largest numbers were from the American Federation of State, County and Municipal Employees Union, including many city of Detroit retirees. The United Auto Workers had a large presence as did union firefighters, International Brotherhood of Electrical Workers members, the Detroit Federation of Teachers, UNITE HERE and postal workers’ unions, among others.

A high point early in the demonstration was the arrival of Occupy Wall Street protesters, who came in solidarity on a bus from New York City. Their multinational contingent marched in with a large banner, chanting, “We are the 99 percent!” while the crowd cheered and joined in. Later, OWS members helped lead a march around the federal courthouse, which Homeland Security cops were unable to stop, much to their chagrin. Meanwhile, Detroit police, both active and retired and all facing cuts in pay, benefits and retirement funds, either joined the demonstration or gave broad leeway to the protesters.

The protest, organized by a coalition of the Moratorium NOW! Coalition to Stop Foreclosures, Evictions & Utility Shutoffs; Detroiters Resisting Emergency Management; and other activists, was supported by AFSCME Council 25 and was a joint effort by everyone involved.

Inside, lawyers for the “city” and the banks argued for bankruptcy in order to reap a maximum return off the residents, workers, retirees and assets of the city of Detroit. It is illegal under the Michigan state Constitution for a city to use bankruptcy as a pretext for taking workers’ pension funds, but that is just what rightwing Republican Michigan Gov. Rick Snyder and emergency manager Kevyn Orr, at the behest of the banks, seek to do.

The trial is expected to continue for at least a full week. Another demonstration took place outside the court this morning and others are being planned. On Monday, Oct. 28, at noon, a large turnout is expected when Snyder takes the stand.

Today, a public hearing and community speakout is scheduled at the City Council Auditorium. Hosted by Councilwoman JoAnn Watson, the event will be an opportunity for retirees, city workers and community residents to go on record opposing emergency management, bankruptcy and the looting of Detroit’s treasury by the banks.