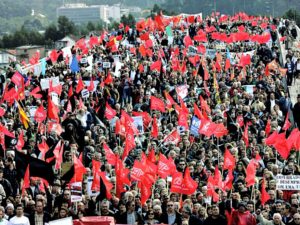 The main Portuguese union federation, the CGTP-IN, reported Oct. 19 that “Many tens of thousands of workers marched today in the two major cities of our country and on the islands of Madeira and the Azores. Their goal was to defend the gains of the April 1974 [anti-fascist] revolution, and raise demands against exploitation and impoverishment, and that the government resign.

“This government has been implementing a policy of violent austerity with brutal and accelerated cuts in wages and pensions, which shamefully benefit the big industries and financial institutions. At the same time it obeys submissively the international ‘troika’ [European Commission, European Central Bank and International Monetary Fund] that impose a painful choke-collar on our people and our country.

“This regressive anti-labor and anti-social policy is reflected perfectly in the draft governmental budget for 2014. If this budget is approved it will further aggravate the sacrifices of the workers and the people.

“The CGTP-IN union confederation had planned for the workers and the population to walk across the Ponte 25 de Abril [the main bridge in Lisbon, the capital]” on Oct. 19, but the government banned it from crossing on foot. “Workers and the CGTP-IN eventually crossed the bridge, using about 400 buses, in addition to private cars and motorcycles, culminating in a powerful concentration of resistance and struggle.” In Portugal’s second city, Oporto, the marchers were able to walk across the Infante bridge in “one of the largest demonstrations ever in the northern capital.”

The CGTP-IN announced a new demonstration in Lisbon to be held in front of the National Assembly on Nov. 1, a likely date for the vote on the government budget for 2014.

In Rome, anti-austerity protesters threw eggs and firecrackers at the Italian Finance Ministry during an Oct. 19 march to oppose the lack of low-income housing and cuts to welfare programs. More than 50,000 marched and were harassed by 4,000 riot police, who arrested 11 demonstrators.

A day earlier a 24-hour nationwide strike in transportation slowed down or stopped much travel. Airports in Rome, Naples, Milan and Bologna had to cancel some flights. School and health workers also went on strike. The strikes were called by rank-and-file-led unions.