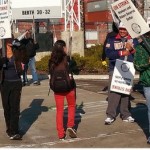 BART strikers picket maintenance facility at the Port of Oakland, shutting down shipping berths 30-32, with cargo worth millions waiting to be unloaded.
WW photo: Terri Kay

Oct. 19 — With the strike by the Bay Area Rapid Transit workers in only the second day, two BART workers were killed by a BART train. It is a tragic but totally preventable accident. Resolving safety issues has been high on the two unions’ demands from day one of the contract negotiations, but BART management has refused to acknowledge that there were any safety issues. Furthermore, despite union objections, management had begun to conduct some crash courses to train BART management personnel to possibly run trains during the strike!

The strike began Oct. 18 after negotiations broke down on the issue of overall work rules, including safety issues. BART management had refused to budge on these issues or agree to arbitration.

BART management claims the train involved in the accident was running on “automatic mode.” Workers World talked to Clarence Thomas, a longtime member of the International Longshore and Warehouse Union Local 10 executive board and co-chair of the Million Worker March, about his experience in dealing with similar issues at the docks where management has installed automation to run the cranes and other equipment.

“Employers want to use technology to replace the workers,” said Thomas. “It’s all about production, to the detriment of the workers and the public. You need skilled people to do the job — who don’t need to be worried about their wages and benefits.

“The use of technology to cut labor costs and speed up production is a worldwide issue. Someone had to be operating the train initially to put it in automatic mode.”

This accident has the potential to materially change the balance of forces in the contract struggle in favor of the workers. An independent labor/community fact-finding investigation needs to be launched to look into this tragedy about who was responsible for the murders. Such an investigation would reveal the criminality of corporate union busting and expose how management’s demands to control work rules have created unsafe conditions.

Another significant force was brought into play the first morning of the strike when the Transport Workers Solidarity Committee persuaded members of the Amalgamated Transit Union Local 1555 to set up a picket at a BART maintenance site at the Port of Oakland. BART shares an entrance there with some multinational shipping companies, including TraPac, APL, MOL Logistics, and Hyundai Merchant Marine. The TWSC, which includes ILWU members, knew that ILWU members would refuse to cross the picket line.

The BART pickets shut down terminals 30-32. This effective action showed how solidarity between the unions can build pressure on BART management to settle the strike.

WW spoke with three union activists. ATU Local 1555 picket leader Nucion Avent said, “We have a BART facility here at this major hub for international transport, and it just so happens over $1 million [worth] of merchandise won’t be moved.”

Maureen O’Connor, ATU 1555 steward and train operator, with 24 years of seniority, said, “[Our picket] line brought solidarity with other unions.” She explained, “It’s big business. BART doesn’t care about the people in the Bay Area. [Its] Board of Directors was elected to look out for things, but instead everything is broken and dirty. We’re not asking for anything unreasonable, but BART got dirty, underhanded and nasty.”

After speaking at a joint Service Employees Local 1021 and ATU 1555 rally at the Lake Merritt BART station yesterday, Chris Finn, a member of the bargaining committee and ATU 1555 recording secretary, told WW about how BART put out a proposal that would essentially take away the unions’ right to bargain.

“Why is BART management so intent on having a strike?” he asked. Finn described how management “has refused to negotiate. They caused this strike.” He complained about a “number of issues introduced at the last minute” and said there were 60 proposed takeaways. Finn said BART management wanted to “implement changes to their working conditions at will.”

In the Oct. 19 San Francisco Chronicle, Antoinette Bryant, ATU 1555 president, described how management’s offer of a 12 percent raise (3 percent over four years) actually added up to a 1 percent loss, after subtracting the contributions BART management was demanding from the workers for pension and health care benefits. Bryant added that the outstanding work rule issues included the length of the working day and “when overtime kicks in.”

BART workers have not had raises since 2009, and gave concessions worth $100 million to support BART during the last recession. BART has actually projected a $125 million annual surplus for the next ten years.