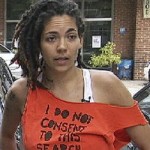 Christina “Stina” Gonzalez is a 27-year-old Latina and a fierce fighter against police brutality in New York City. Her activism began at Occupy Wall Street in the fall of 2011 and has not stopped since. Gonzalez, and her partner Matthew Swaye, had their faces plastered on posters. The posters, put up by the New York Police Department’s 30th precinct, warned police officers to “be aware that the above subjects are known professional agitators.” The posters were distributed to the police stations across the city in 2012, highlighting that Gonzalez was video recording the NYPD’s “routine” activity of “stopping and frisking” youth of color. The poster also contained their home address.

Videos of Gonzalez confronting the NYPD can be seen across the Internet. In the process of filming the police, she has been arrested 11 times, with six cases dropped, and five still pending.

In 2012, she made headlines when she appeared before Judge John H. Wilson, who sits on the bench in Brooklyn. He wrote an anti-immigrant picture book called “Hot House Flowers.” The text was designed to teach children to hate undocumented workers. When Gonzalez appeared in his courtroom, she loudly called him a “racist white pig.” When she refused to apologize, she was sentenced to 10 days on Riker’s Island.

When reflecting on her time in jail, she recalled to WW: “Beautiful womyn that don’t deserve to be there, fill the beds of Riker’s island.” She also said: “I was able to stop a misogynist fascist from terrorizing the womyn in my dorm for at least one week. That was worth it!”

Now Christina Gonzalez is running for City Council. In her district of Morningside Heights in Harlem, she is running against Mark Levine. Endorsed by the gentrifying realty companies and the big money, Levine is a Zionist Democrat. Gonzalez is the only other candidate on the ballot. She is running on the Green Party ticket. Levine refused to attend the debate called by the League of Women Voters.

Gonzalez’s campaign includes a call to end police brutality and “stop and frisk.” She calls for the legalization of marijuana and an end to the “war on drugs.” She says she is for “redesigning schools to be safe spaces where children can feel free to express their creativity and curiosity. I hope to create legislation that would tax Wall Street, so that our children can have music, yoga, self defense, and second language classes.”

She went on to tell WW: “I would like to replace cops with mediators, yoga instructors, artists, self-defense trainers, comedians, historians, documentarians, etc. We need more cultural arts and recreation centers.”

Christina Gonzalez supports raising the minimum wage for all workers and plans to speak at the upcoming People’s Power Assembly rally on Oct. 24 at Herald Square. She thinks rent should never be more than 30 percent of working people’s income, as housing is a ­human right.

A crew of supporters have been spending their weekends pounding the pavement on her behalf. The supporters include students at Columbia University, longtime Harlem residents, community activists and organizers with the NYC chapters of “Fight Imperialism — Stand Together” (FIST) and Workers World Party.

Many revolutionary and progressive forces are happy to join Gonzalez’s campaign as she fights against mass incarceration, police terror, low wages and the other daily horrors of U.S. capitalism. Amidst that campaign, she talks about the evils of “white power” and misogyny, and holds up revolutionary fighters like the Black Panthers as the heroes young people should look up to.

Support for the election campaign of this militant anti-racist fighter is part of building the revolutionary movement all working class and oppressed people in the U.S. and around the world so ­desperately need.