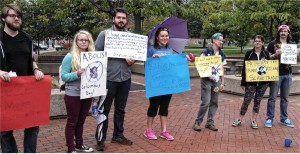 Huntington, W.Va. — An anti-“Columbus Day” demonstration took place on the campus of Marshall University in Huntington, W.Va., on Oct. 14.  The event was attended by members of a campus group called “Students for Appalachian Socialism” as well as from Fight Imperialism, Stand Together (FIST). The protesters handed out flyers reading “Columbus Day or Indigenous People’s Day? You Decide” as well as informative literature on the genocide carried out by the violent racist Christopher Columbus and the European colonialist forces that followed, as well as their paving the way for the slave trade.

One protest sign included a quote by Columbus where he discussed his plans to kidnap and sell girls as young as 9 and 10 into the sex trade: “A hundred castellanoes (a Spanish coin) are as easily obtained for a woman as for a farm, and … there are plenty of dealers who go about looking for girls; those from nine to ten (years old) are now in demand.”

Columbus was known to engage in and promote rape of the Indigenous Taíno people he encountered upon landing on the island of Hispaniola. The life of slave labor and rape became so unbearable that the Taíno resorted to mass suicide. Pedro de Córdoba wrote to King Ferdinand in 1517: “As a result of the sufferings and hard labor they endured, the Indians choose and have chosen suicide. Occasionally a hundred have committed mass suicide. The women, exhausted by labor, have shunned conception and childbirth. Many, when pregnant, have taken something to abort and have aborted. Others after delivery have killed their children with their own hands, so as not to leave them in such oppressive slavery.” (“Lies My Teacher Told Me,” by James W. Loewen, p. 54)

The protest was organized by Marshall University political science major Genenahgehneh “Autumn” Lee who is of the Haudenosaunee people and a member of the Six Nations Reserve in Ontario, Canada. Asked about her motivation for the demonstration, Lee told Workers World: “I feel it’s important for people to know the history — the true history — of the U.S., and Columbus Day is just one of the many things that is corrupt in this country. There are other things like the boarding schools that started in the 1800s and went through the 1900s and didn’t stop in Canada and the U.S. until the 1970s and 1980s. There is just a whole history that people don’t know. They only know what they are taught by the conquerors.”

The boarding schools Lee referred to were originally built by Christian missionaries for the indoctrination of Native children into Eurocentric culture. The children were often required to adopt a Western haircut and were forbidden to speak their Indigenous language or even use their given name.

In 1989, George H.W. Bush stated on behalf of his class about this despicable historical figure, “Christopher Columbus not only opened the door to a New World, but also set an example for us all by showing what monumental feats can be accomplished through perseverance and faith.”

Many people wonder, especially after learning the facts,why Columbus Day is still a celebrated federal holiday in the United States. But it is really no surprise that the leading imperialist state in the world commemorates such a figure. After all, Columbus began the colonization of an entire land as well as the slave trade, both of which laid the foundation for the exploitative power of the U.S. capitalist class.