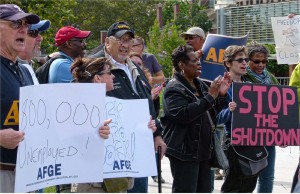 Oct. 15 — Articles in the capitalist press say that big business is losing its sway with the Republican Party. But this is a false way to view what’s happening. Big business has lost control of a right-wing ideological faction in the House of Representatives that big business created in the first place.

Big business has spent four decades fomenting right-wing ideology and organizations, publications and political candidates to spout that ideology. In the present government shutdown/debt-ceiling crisis, the super-rich’s own creations have come back to bite them.

While the civil war in the Republican Party goes on between the ultra-rightist Tea Party faction and the right-wing mainstream, it is the workers and the oppressed who are suffering. Paychecks have been stopped; services have been suspended; on-the-job safety enforcement and the work of the National Labor Relations Board are on hold; environmental protection has been suspended; and so on.

In the midst of this crisis, big business is worried most of all about the delays in government payouts it depends on. Above all, the financial oligarchy and big business are worried about what will happen to the global profit system if the U.S. defaults and does not pay off its bondholders on time.

According to the Washington Post, President Barack Obama, Treasury Secretary Jack Lew and White House Senior Adviser Valerie Jarrett held a conference call on Oct. 11 with nearly 150 business executives who urged them to avoid default. After the call Jarrett met with lobbyists for the Chamber of Commerce, the National Association of Manufacturers, the Financial Services Roundtable and other business groups representing aerospace and technology companies.

Jarrett asked the groups to “encourage their member companies to communicate with lawmakers on the urgency of finding a negotiated solution.”

The Tea Party group is so fanatically rigid and dedicated to destroying the food stamp program, wiping out any health care program, destroying Social Security and Medicare, among other things, that it has seized upon the government funding/debt-ceiling crisis to demand surrender by the Democratic Party and the Obama administration to all its demands.

To be sure, big business is not soft on austerity measures for the masses. Where it diverges from the Tea Party is strictly on the question of the stable functioning of the capitalist profit system and avoiding a crash.

As one paper put it during the 2011 debt-ceiling crisis: “On most economic issues, the GOP’s corporate wing and its Tea Party wing are in sync. … They hate labor unions and progressive income taxes. On almost every economic policy of any importance — protecting tax cuts for the rich, privatizing Social Security, opposing cap-and-trade legislation, expanding offshore drilling, opposing strong pro-worker labor laws, slashing unemployment insurance, limiting the authority of the Food and Drug Administration, and many others — the two GOP wings agree.” (Huffington Post, Aug. 9, 2011)

The Tea Party types are so pro-big business that the bosses will support them in the elections to foster their own corporate, right-wing agenda in Congress. But as a representative of the National Federation of Independent Business said, “We vetted people on the business issues. We didn’t vet them on the debt ceiling.” (WP, Oct. 11)

The racist, anti-immigrant, sexist, homophobic and anti-labor Tea Party fanatics grow out of a subsoil long cultivated by the very big business leaders who are now on the phone with Obama and the politicians trying to get them to avert the present crisis.

Back in 1971, Lewis Powell Jr., then a powerful ­corporate lawyer and member of 11 corporate boards, wrote the infamous “Powell Memo” addressed to the Chamber of Commerce. It later became known as the “Powell Manifesto.” Two months later, President Richard Nixon nominated him to the Supreme Court.

The lengthy memo was a harsh, right-wing critique of what Powell considered the dismal political and social state of U.S. capitalist society, which he — and his ilk — viewed as under threat. He was writing at the height of the anti-Vietnam War movement, the Black Liberation struggle, the women’s and gay liberation movements.

The force of radicalism and liberalism was penetrating the hallowed institutions of capitalism, according to Powell. Emphasizing the campuses and the media, Powell attacked the socialist and communist left but emphasized the broader sections of society.

He condemned such figures as the anti-racist civil rights lawyer William Kunstler, consumer advocate Ralph Nader and Marxist professor Herbert Marcuse as examples of how public life was being dominated by the left.

The memo called for a long-term, organized counteroffensive. Powell appealed to the Chamber to become the principal center of this campaign. He advocated for the creation of foundations, think tanks, speakers’ bureaus, right-wing media (especially television shows), and textbooks at all levels of education to bring a right-wing, pro-big business agenda into the schools. He proposed publishing books, paperbacks and pamphlets promoting capitalism and big business.

He denounced corporate leaders for being too passive. He warned that the left had attractive and influential personalities who were smart, persuasive and prolific writers.

Powell called for the Chamber to establish a staff of highly qualified scholars in the social sciences who believed in capitalism. The scholars should review and amend textbooks to counter the influence of civil rights groups and labor unions. There should be speakers of the highest competency, including from big business.

Powell called for monitoring television shows like “The Today Show” and “Meet the Press” and for pressuring the networks and the Federal Communications Commission to bring right-wing ­ideology into the media.

He laid out a program for taking over political machines, influencing courts, mobilizing stockholders for voting purposes, and many other measures.

Coming from the highest echelons of the ruling class, the manifesto engendered a protracted campaign to overcome the progressive and radical era that began with the Civil Rights Movement in the 1950s. It has been credited with leading to the Heritage Foundation, the CATO Institute, Citizens for a Sound Economy and many powerful organizations.

‘Wipe out opposition to rule of capital’

This was the beginning of a long, conscious, coordinated counteroffensive by the capitalist vanguard to overturn the progressive era of the Civil Rights Movement, the labor movement and other social movements. Its purpose was to wipe out militant opposition to the untrammeled rule of capital.

The basis for today’s fanatical right-wing assemblage was created over decades of conditioning. The entire content of the Powell Memo has been realized over time.

This is the soil from which the Tea Party grew. It burst onto the scene in 2010 with a racist campaign against Barack Obama, using his health care plan as the cutting edge.

And now this odious creation of big business has come back to bite the bosses in the debt-ceiling crisis. Generations of savage, racist, anti-worker and all-around reactionary ideology have been promoted by demagogues — from Barry Goldwater to the John Birch Society, to the Christian Right, to Rush Limbaugh and Glenn Beck.

The fanatics of the Tea Party are the natural result of capitalist reaction. They are ready to destabilize the capitalist system to promote their attacks on the workers and the oppressed — the same attacks their corporate mentors taught them to make.

The Republican Party has been the main party of the bourgeoisie since its founding before the Civil War when its emphasis was opposing slavery. After the North won, the party quickly shed its progressive skin. It abandoned Black Reconstruction and, leaving the ­African-American masses of the South at the mercy of the old slavocracy, entered the era of the robber barons and an open war against labor.

U.S. capitalism became imperialist with its intervention into Asia and Latin America at the end of the 19th century.

Today, it has entered into its decadent, dead-end stage, accompanied by political reaction, which is reflected in the ­Republican Party.

To be sure, many millionaires and billionaires are also quite at home in the Democratic Party. And they should be, given the capitalist, imperialist nature of that war-making, budget-cutting, deportation-happy party.

On the other hand, the working class is faced with the task of mobilizing against the devastating effects of the government shutdown as well as keeping the backlash of a possible default from falling on the shoulders of the poor and oppressed.

Goldstein is the author of “Low-Wage Capitalism” and “Capitalism at a Dead End,” which has been translated into Spanish as “El capitalismo en un ­callejón sin salida.”