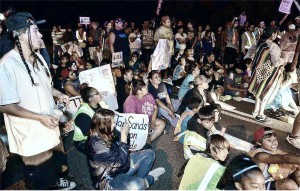 In early August, hearing news that General Electric was planning to move a megaload of oil refinery equipment — 255 feet long, 21 feet wide and 23 feet tall, weighing 320 tons — over their land on Idaho’s Route 12, “a wild and scenic two-lane highway,” the Nez Perce Council met and voted to block the load with their bodies.

News spread like wildfire through the reservation, fueled by social media. Over 200 members, plus supporters from Occupy Idaho and the environmental movement, showed up to put their bodies on the line. Whole families came — grandmothers with their grandkids, elders and youth.

Some 28 people were arrested over two nights of protest, including eight of the nine members of the Nez Perce Council.

Commenting on the protests, Silas Whitman, chair of the council, who was one of those arrested, told the Sept. 25 New York Times, “The development of American corporate society has always been — and it’s true throughout the world — on the backs of those who are oppressed, repressed or depressed.”

After the first shipment destined for the tar sands of Alberta, Canada, made it through, the Nez Perce went to court, and on Sept. 13 a federal court blocked a second shipment. However, an appeal is in process.

A series of articles in the Idaho Statesman in August and September make the economic stakes of this dispute clear. GE, which manufactured the equipment, told the court it would save $3.6 million by going through Idaho. Other articles project that as many as 1,000 megaloads are possible over this route, turning it into a major industrial corridor.

The Nez Perce, Whitman made clear in an opinion piece in the Sept. 8 Idaho Statesman, are not opposed to economic development and jobs, but they want to control what happens to their people and their land. They want their rightful say.

He wrote, “The tribe has been ignored by the outside interests who will reap profits at the expense of the region’s resources. This exclusion led to frustration that spilled over into acts of civil disobedience so the tribal voice was heard. The tribe refuses to be excluded any longer.”

As big oil and its allies, like the pipeline companies and equipment manufacturers, have spread their tentacles and operations over areas of the United States that used to be considered isolated, they are encountering more and more people — especially Native people — who oppose their destruction.