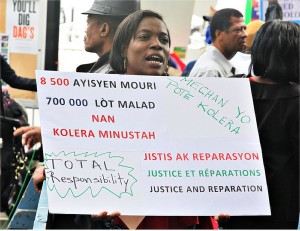 Around 100 people, mainly Haitian, gathered in New York’s Dag Hammarskjold Plaza, opposite the U.N. headquarters, for an eight-hour demonstration on Sept. 26. They called for that body to pay reparations for the cholera that soldiers from Minustah — the U.N. Stabilization Mission in Haiti — brought to Haiti in October 2010.

The resulting epidemic is the world’s worst outbreak of the disease, having killed more than 8,300 and sickened more than 680,000. Despite legal actions against it, the U.N. has refused to admit responsibility for unleashing the epidemic or to pay reparations.

The demonstration was called by a broad Haitian community alliance that includes the Coalition to Support the Haitian People’s Struggle (KAKOLA), the International Support Haiti Network (ISHN), Haïti Liberté, and leading members of the Lavalas Family Party in New York.