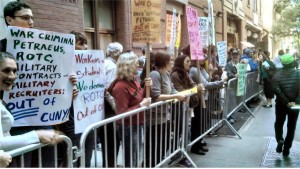 Whether he shows his face in Los Angeles or New York, David Petraeus — the retired general who commanded U.N. and U.S. troops in Afghanistan and then served as head of the CIA — has to confront protesters who call him a mass murderer, war criminal and liar.

At the University of Southern California, Petraeus was scheduled to speak at a Veterans Club luncheon on Oct. 10, the twelfth anniversary of the U.S invasion. Within a day of the news leak, with thousands in the street, USC vets canceled the event.

In New York, where Petraeus teaches a seminar at the City University of New York’s Macaulay Honors College once a week, an ad hoc coalition has come together to confront him as a war criminal at every class he gives. During a protest at a gala dinner CUNY held Sept. 17, six students were attacked by cops and then arrested.