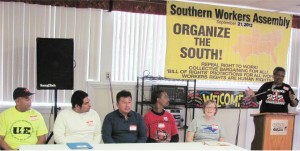 The Southern Workers Assembly hosted a statewide North Carolina Workers Fightback Conference on Sept. 21 in Raleigh that was attended by fast-food workers, state employees, city workers, education workers, farmworkers, theatrical workers and many others from Greenville, Charlotte, Goldsboro, Durham, Raleigh and all across the state!

The major purpose of the conference was to unite workers that are in motion as part of the Moral Monday, Forward Together movement to fight against budget cuts, racist attacks, but particularly to unite labor around a program and campaign to fight for labor rights in this Southern state with the least number of unions compared to the rest of the U.S.

The proposed House Bill 6 would make right-to-work (for less) laws and the ban on public sector collective bargaining — both already law — part of the state constitution, along with a ban on card check union recognition.

This is a major juncture for labor. The conference agreed to a Workplace Democracy campaign that includes the fight for $15 an hour for all workers (or family-supporting wages), a Workers Bill of Rights, no to HB6, and to further build social justice unionism across the state.