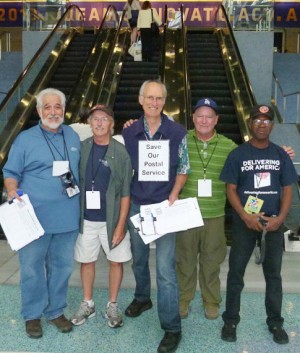 Members of Communities and Postal Workers United and Community- Labor United for Postal Jobs and Services attended the quadrennial AFL-CIO convention here from Sept. 8 to 11. The postal activists were there to broaden the movement to save the U.S. Postal Service.

They handed out hundreds of “Privatization hurts all workers” fliers and CPWU newsletters. At least 400 signatures were gathered on petitions; many signers expressed interest in doing more to save the post office in their cities and towns.

“Resolution 40: A Postal Service for the 21st Century: Innovation and Growth, Not Downsizing and Decline” was passed unanimously by the convention delegates, after remarks from Western Regional Coordinator Omar Gonzales, of the American Postal Workers Union; President John Haggerty, of the National Postal Mail Handlers Union; and President Fred Rolando, of the National Association of Letter Carriers.

Piette is a retired postal worker.