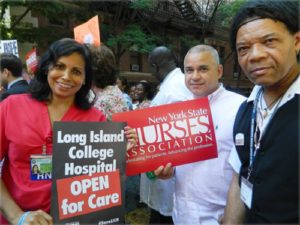 Brooklyn Judge Johnny Lee Baynes ruled Sept. 12 that New York state’s justification for the closing of Long Island College Hospital was “unconstitutionally vague” and did not take the medical needs of the community into account. His ruling actually applies to all the New York hospitals threatened with closure.

For the past decade, the state has been trying to close hospitals in New York City, claiming they are too expensive but not bothering to prove that the communities they serve don’t need them. St. Vincent’s Medical Center was closed in 2010, leaving a half-million people on Manhattan’s Lower West Side underserved.

In fact, because many people are now living longer, they need more care as they get older and frailer.

An important factor in mobilizing community support was the nearly weekly marches the coalition to save LICH held. They marched down Fulton Street, chanting “Brooklyn, Brooklyn, can’t you see, we have a health care emergency!”

Black churches in the community endorsed the campaign, especially after the closure of IMC was raised, and this drew in Black politicians. The marches included one that went across the Brooklyn Bridge, and these protests often had a militant element, with people blocking traffic and getting arrested. A vigil brought out enough people that IMC was surrounded by protesters holding hands.

As the campaign developed, citywide groups like the National Action Network, headed by the Rev. Al Sharpton, and the New York Communities for Change became involved, broadening the struggle.

The mass pressure this protest movement built up brought in big-name politicians, in particular Bill de Blasio, the Democratic politician who came in first in the recent Democratic mayoral primary for New York.

De Blasio and his supporters made a big presence at the victory rally the unions held, but it was the unions, their members and the community that really won the victory.

The state obviously will appeal and will try to whittle away at LICH even if it can’t officially close it. The unions and the community intend to remain vigilant.