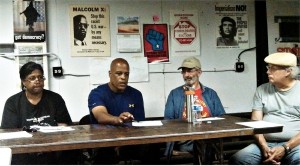 For two years and two months a determined group of fired autoworkers have lived in tents outside the U.S. Embassy in Bogotá, Colombia. They, along with hundreds of their counterparts, were fired for the crime of suffering work-related injuries and disabilities. General Motors, their former employer, is still refusing to negotiate a just settlement with the Association of Injured Workers and Ex-workers of GM Colmotores (Asotrecol).

The U.S. Embassy was targeted because of Washington’s ownership stake in GM and its role in the 2009 bailout of that company. These courageous workers have held three hunger strikes, with their lips sewn shut, to dramatize their hardship. Not only were they fired, but documents were forged to deny them workers’ compensation.

Their struggle is hard. Their dire financial situation means their families sometimes go without food; some have been evicted and others are facing foreclosure. Without money for the surgeries they need, their physical conditions continue to deteriorate.

Their spirits were lifted tremendously, however, when a solidarity delegation arrived from Detroit. Two former UAW presidents, Melvin Thompson and Frank Hammer, joined the encampment and lived with the families for two weeks. A week later, they were joined by the Rev. Charles Williams, president of the Detroit chapter of the National Action Network, and NAN activist Debra Simmons. Asotrecol support activist Paige Shell-Spurling from Portland, Ore., was also part of the solidarity delegation.

The five activists also demonstrated with a group of fired injured miners from another region of Colombia who have been inspired by Asotrecol. Not long after the U.S. activists returned to the encampment, the miners were brutally beaten by police. Colombia is the most dangerous place in the world for unionists and worker rights advocates.

While the delegation was there, a second morale booster was the arrival, via Western Union, of almost $900 donated by Detroit-area Chrysler workers who are members of UAW Local 869. This enabled one of the workers to have abdominal surgery, needed as a result of the hunger strike. It has been the donations of U.S. supporters, especially the $10,000-plus contributed by UAW members, that have kept the encampment going as a symbol of resistance.

In August, after the delegation returned home, the Embassy attempted to illegally have the encampment — which is not on Embassy grounds — evicted. A fourth hunger strike began and Carlos Ernesto Trujillo, who was unable to work at GM due to shoulder injuries, strapped himself to a cross in a crucifixion protest. A mere 15 hours later, Asotrecol President Jorge Parra secured an agreement from government officials to call off the eviction. The agreement also stated that an executive at GM headquarters in Detroit pledged to engage in mediation on Aug. 22 with Asotrecol.

The mediation did not take place as promised. Asotrecol did meet with members of Colmotores plant management, but their issues remain unresolved.

Their struggle is, nevertheless, having a huge impact. Inside the Colmotores plant, major changes have taken place in the area of safety and ergonomics. Injured and incapacitated workers are no longer being fired.

The solidarity delegation has been sharing their experiences with Detroit activists, including members of the Moratorium Now! Coalition to Stop Foreclosures, Evictions and Utility Shutoffs. Most recently, Hammer and Thompson addressed the rank-and-file group Autoworker Caravan. “There is no separation between Asotrecol and us,” Thompson explained. “Corporations employ economic violence. What we absolutely have to do here is all sing the same song.”