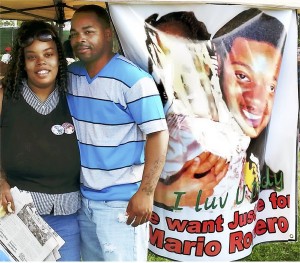 Vallejo, Calif. — About 75 family and community members came to the First Annual Community BBQ in Remembrance of Mario Romero at Wilson Park in Vallejo, Calif., on Sept. 2. Later that evening, they held a candlelight vigil. Many of Romero’s friends, from elementary through high school, participated with the others in a speak-out.

On Sept. 2, 2012, Romero was sitting in his parked car in front of his home when he was approached and gunned down by a Vallejo police officer, identified by multiple witnesses as Dustin B. Joseph. Public and court records indicate a series of complaints that detail a history of Joseph’s abusive and questionable behavior.

Romero’s sister, Cyndi Mitchell, recounted: “Mario never got out of the car. Once they killed him, they cut him out of the seat belt. He had been shot in the hands, wrist, face, mouth … all indicating he had his hands up.” Mario was killed 15 days before his 24th birthday.

For the past year, Romero’s family and other community members have been organizing as part of the Justice for Mario Romero Foundation to try to get Joseph to be held accountable for Romero’s killing. A year after the killing, this reporter asked Mitchell about what the group is doing now.

Mitchell replied: “We are working with other families who have been victims of police violence in Vallejo, trying to write up their stories. The barbecue was to let the community know that we appreciate how people came forward to support us. A lot of people don’t know that he wasn’t a parolee, despite rumors — not that that would justify his murder.”

She said: “Most people aren’t aware that drug and alcohol testing isn’t mandatory for police officers, nor are psychological evaluations. We want to see that officers who patrol the community are drug and alcohol tested on a regular basis and especially after any incidents. We want a law to that effect, to enforce accountability. We want to prevent the ability of police to cover up the use of excessive force.”

Mitchell discussed how she wanted “the community to know that this is an epidemic that is going on. We want to insure that the leaders elected for our community aren’t intimidated by the police. People should be able to live where they want, free from terrorism. The police are terrorizing our community. The president of the U.S. is talking about war in Syria, while we are facing police terror at home. We’re gearing up and connecting with the community and working to build for the statewide march against police brutality in Sacramento on October 22.”

She added: “The pain doesn’t get any easier. After a year, I’m just learning how to deal with it. I’m learning how to be more aggressive in letting people know what’s going on. People tend to believe the police and don’t know about their lies and cover-ups. We can’t get information on a police officer when he’s brutalizing the community. There are many complaints about the officer, Dustin Joseph, who murdered my brother. He should have never been on the streets in the first place.”