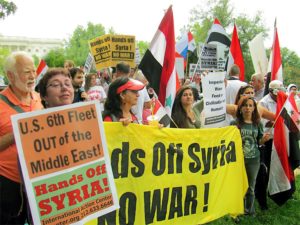 Sept. 9 — President Barack Obama and the White House are struggling mightily to override global and domestic opposition to a military adventure in Syria by trying to get Congress to vote for war.

Washington is pulling out all the stops. White House Chief of Staff Denis McDonough went on all five Sunday morning television shows to push the war. Obama is appearing on six major TV networks tonight and will make a major speech tomorrow, all to try to reverse a growing momentum against the Syrian adventure.

Polls show that even after having been saturated with accusations of chemical warfare atrocities by the Syrian government — accusations which have been simply asserted over and over but remain unproven — the population is overwhelmingly opposed to going into a new war.

According to a Sept. 9 CNN/ORC International poll, nearly 60 percent of the people oppose a limited military strike. Some 55 percent said they’d oppose it even if Congress approved it, and 71 percent would oppose it if Congress turns it down.

This poll probably underestimates the opposition because widespread anecdotal accounts by various legislators speak about margins of 100 to one and more opposing intervention. A small fraction of the opposition is anti-Obama from a reactionary direction.

Washington has been waging a two-and-a-half year proxy war to try to overthrow the independent nationalist government of Bashar al-Assad of Syria. Tens of thousands of Syrian soldiers have died on the battlefield in defense of the country.

The pro-Washington forces, the so-called Free Syrian Army, euphemistically dubbed “the rebels” by the capitalist media, have been militarily ineffective, filled with factional strife, splits, turf wars, resignations and in growing conflict with the al-Nufra and other Salafist (Islamic) forces.

Meanwhile, the Syrian government and the Syrian army have shown their staying power, gaining on the battlefield. With the assistance of Hezbollah, they retook the major town of Qusair from the contras on June 6. Since that time the government forces have been gaining military momentum in Homs and other towns, and are on the offensive.

Thus the U.S. plan to frame up the Syrian government with repeated lies about President Assad’s use of chemical weapons. Chief of Staff McDonough exhibited false bravado about the lies when he told the Sept. 8 New York Times, “No one with whom I’ve spoken doubts the intelligence. We’re not really debating the veracity of the central charge.”

But McDonough undoubtedly had read the op-ed column in the New York Times of the previous day by Florida Democrat Alan Grayson of the House Foreign Affairs Committee. Grayson had attended a special briefing about the administration’s “evidence.”

“The Syria chemical weapons summaries are based on several hundred underlying elements of intelligence information. The unclassified summary cites intercepted telephone calls, ‘social media’ postings and the like, but not one of these is actually quoted or attached — not even clips from YouTube. (As to whether the classified summary is the same, I couldn’t possibly comment, but again, draw your own conclusion.)”

Grayson revealed that members who attended were not even allowed to talk to each other or question the validity of anything that was said! This is what the government does when it is covering up lies.

This has all the earmarks of the “weapons of mass destruction” fraud perpetrated by the Bush administration in its drive to get approval for the 2003 invasion of Iraq.

It is the height of imperialist hypocrisy for the U.S. government to level charges of weapons of mass destruction against the Syrian regime and to claim humanitarian motives for carrying out an act of aggression.

Washington is the only government to have used the ultimate weapon of mass destruction, the nuclear bomb, on Hiroshima and Nagasaki to end World War II in 1945. Actually, the U.S. Air Force inflicted more casualties than the atom bomb by creating firestorms over the major cities of Japan, incinerating hundreds of thousands of civilians. The U.S. killed up to 135,000 people in Dresden, Germany, with a similar firestorm.

Washington dumped millions of gallons of Agent Orange pesticide on Vietnam, leaving a continuing legacy of cancer and birth defects, in addition to using napalm on the Vietnamese population. The U.S. military used cancer-causing depleted uranium shells in Yugoslavia and Iraq, leaving radiation that lasts thousands of years.

The U.S. used the 15,000-pound “daisy cutter” in Vietnam and Afghanistan. The largest bomb in existence, it explodes above ground into thousand of fragments and destroys everything within a radius of 600 yards.

In the battle for Fallujah in the second Iraq war, residents told reporters that the U.S. military used poison gas and rained down white phosphorous bombs on the city of 300,000 in an attempt to root out resistance fighters.

This record of atrocities puts the struggle of Washington against chemical weapons in a different light.

As far back as 2009, Hillary Clinton sent out a memo urging that a strong campaign be enforced to prevent Syria, Iran and North Korea from obtaining chemical weapons. Given the bloody history of the U.S. use of weapons of mass destruction, the idea that Clinton was motivated by humanitarian considerations is ludicrous.

In fact, the countries on her list were precisely the ones that became the Obama administration’s “axis of evil” after George W. Bush destroyed Iraq. They are the countries targeted for overthrow, “regime change,” by U.S. imperialism.

Chemical weapons can be viewed as defensive by formerly oppressed countries trying to prevent invasion by imperialist “great powers.” The attempt by the “great” nuclear powers to deny independent, sovereign, formerly colonial countries the right to stockpile chemical weapons is a purely military measure by the colonialists. The campaign against Iranian nuclear development is part of the same strategy.

It is an attempt to eliminate these countries’ defenses in advance of imperialist attack. All the talk of humanitarianism is just a ruse for a military stratagem by the Pentagon and the White House.

The Obama administration, and the U.S. imperialists as a whole, have made a series of miscalculations with their Syrian adventure that have brought them to their present dilemma.

Thus, after completely underestimating the mass resistance it would encounter, the Obama administration forced all the capitalist politicians into the position of having to face the ire of a war-weary population if they went on record approving an illegal act of aggression that could spiral into a massive conflict.

Obama and his advisers no doubt felt that they could use patriotic propaganda and scare tactics to easily galvanize the population and the political establishment behind a war. This would politically strengthen Washington’s hand in the face of its international isolation. After all, there were many precedents: the 78-day bombing of Yugoslavia, two wars against Iraq, the war against Afghanistan and the war against Libya.

But the plan to attack Syria has brought to light the fact that this is a new period. The position of U.S. capitalism and imperialism has deteriorated at home and abroad during this past decade of war and economic crisis.

The disillusionment, disgust and anger at the Pentagon’s wars that have accumulated over the past decade had few means of expression. There was no mass anti-war movement.  But the sudden lurch toward a new war has revealed this widespread opposition, invisible until now. The masses are sick and tired of war after 10 years. And they are deeply concerned about the devastating effects of on the current economic crisis.

The ruling class is split on the war. One only has to see the pages of the quintessential establishment newspaper, the New York Times. One day the front page has headlines and pictures against the war. The next day it has headlines and op-ed pieces for the war.

The fact that opposition to the war is being carried out by capitalist politicians and imperialist spokespeople creates mass confusion and conceals class politics.

The so-called “opposition” resorts to arguments such as “lack of evidence,” or the war won’t help the U.S. Sometimes it even goes so far as to say it is illegal.

But the issues of importance to the workers and the oppressed are submerged.

They are suffering prolonged mass unemployment, growing poverty, declining wages, cutbacks in social spending, racist attacks and police brutality, attacks on immigrant workers, the militarization of the borders, and a general decline in material conditions.

The war will only intensify this suffering by feeding hundreds of billions of dollars more to the military-industrial complex, the war contractors and all their subcontractors, while the cities go bankrupt, services are cut and the rich get richer every day.

This war will not only take its toll on the workers at home but will bring death and destruction to the Syrian workers and peasants, with whom the workers in this country have far more in common than they do with the oil companies that covet complete domination of the Middle East.

Nor is this bourgeois opposition exposing the Pentagon, which seeks strategic territory in the Mediterranean, or the merchants of death and the Wall Street bankers who stand to benefit from war.

The same bankers who are foreclosing on millions of homeowners, who are charging usurious interest rates to students and who are sucking the cities dry would love to set up shop in Syria, which is a commercial and economic hub on the Mediterranean.

The bourgeois “opponents” do not talk about the mounting casualties of post-traumatic stress disorder among veterans;  the epidemic of suicides among soldiers and veterans who have been destroyed by having to carry out brutal imperialist aggression; the vast number of maimed veterans in the hospitals and homes; the broken families; and the jobless and homeless veterans. But these are the pictures conjured up by the threat of a new war.

All this highlights the decline of capitalism in the U.S. as well as the decline of global influence by U.S. imperialism. The imperialist allies are leery of being dragged into another disastrous military adventure by the overlords in Washington.

But the architects of U.S. imperialism are in a great dilemma. As the international enforcer of the world order, Washington and the Pentagon resist stepping backward. To do so would be to show vulnerability and weakness, something an aggressive, adventurous super-power that claims domination over the whole world cannot do.

Whether they find a way to postpone or step back from this new adventure for the moment, Washington and Wall Street are driven forward in their aggressive advance, all the more so as the economic foundation of their rule deteriorates with the economic crisis.

This decline has the potential to open up a new, more widespread, working-class resistance to imperialist war. The passive resistance must be mobilized into active, conscious resistance. Struggle is the only way to stop war.

Goldstein is author of “Low-Wage Capitalism” and “Capitalism at a Dead End,” which has been translated into Spanish as “El capitalismo en un callejón sin salida.”