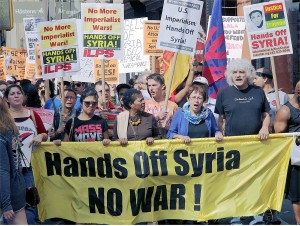 On the Sept. 7-8 weekend, reflecting deep opposition to the U.S. plans to attack Syria, anti-war demonstrations erupted in dozens of cities around the country and worldwide.

New York, Washington, Boston, Los Angeles, San Francisco, Chicago, Philadelphia and Atlanta are just a few of the U.S. cities where people demanded “Hands off Syria!” and “Money for jobs, not for war!”

Most of the demonstrations took place on Sept. 7. Anticipating this upsurge in anti-war activity, on the same day the White House staged a media-blitz public-relations campaign in which a handful of senators were shown videos of the chemical weapons attack that the government of Bashar al-Assad is supposed to have carried out.

In full war propaganda mode, the media treated the showing of these videos with an absurd amount of reverence. The videos in question had already been circulating on YouTube and provide no indication of who carried out the attack. The twist added by the White House is that they were now deemed “authentic” by the “intelligence community” — meaning the CIA.

Of course, the CIA itself is helping train the Syrian “rebels.” Wall Street and its lackeys are fumbling as they try to make the case for a war that is not only unpopular but could ignite a movement against the 1% on all issues — not only war, but police brutality, joblessness, education and more.

This weekend, the seeds of this movement were sown in every city. Given its shameless role as a cheerleader for war, it’s fitting that CNN was the site of the protest in Atlanta. Called by the Georgia Peace and Justice Coalition/Atlanta, the demonstration brought out members of the Syrian, Turkish, Indian and Iranian communities as well as students and activists.

In New York, more than 1,000 people marched from Times Square to Union Square in a joint action called by the International Action Center, World Can’t Wait, the Syrian American Forum and the United National Antiwar Coalition.

A thousand also protested in Los Angeles — where President Barack Obama’s scheduled appearance at the AFL-CIO Convention this weekend was suddenly cancelled. The Answer Coalition’s Washington, D.C., protest, which included an activist who had disrupted Secretary of State John Kerry’s Senate testimony last week, rallied at the White House.

Hundreds rallied in Chelsea Manning Plaza in San Francisco. The rally was called by Answer and supported by UNAC and Workers World Party, among others. Demonstrators then marched along Market Street, in record San Francisco heat, to the United Nations Plaza, chanting “Jobs and education! Not war and occupation!”

In Boston, protesters gathered at downtown Park Street to condemn the march to war. Speakers included representatives of the Syrian American Forum, United National Antiwar Coalition, the International Action Center, the Women’s Fightback Network, the Boston School Bus Union, Veterans for Peace, United for Peace and Justice, Chelsea Uniting for Peace, the Pirate Party and many other anti-war organizations.

The rally in Philadelphia was called by the Philadelphia Peoples Power Assembly and featured speakers Pam Africa of International Concerned Family and Friends of Mumia Abu-Jamal; Gabriel Bryant from Sankofa Community Empowerment; Shesheena Bray of the Askia Coalition Against Police Brutality; Tauheedah Asad, a local Dream Defenders organizer; and media activist Dave Lindorff of the blog “This Can’t Be Happening!” Disabled African-American veteran Joe Moore spoke of the many veterans who still suffer from the toxic effects of Agent Orange, a chemical weapon used extensively by the U.S. during its war against Vietnam.

At the Salt Lake City Federal building, dozens of people shielding themselves from the powerful rain storm held signs and chanted, “No new war! Hands off Syria!” and “It’s a rich man’s war, and they want the poor to pay!” In Indianapolis, about 150 protesters clustered around the Indiana Statehouse in a church-organized protest opposing military intervention.

In Seattle, 120 demonstrators marched to Seattle Center. They took to the streets behind a banner that read “Hands off Syria; not another War!” and protested biased TV network coverage at Channel 4 along the way. On Sept. 5, Milwaukee’s Channel 4 was also the site of a protest, where anti-war activists with signs and banners received ongoing honks of support from passing motorists on busy Capitol Drive, where the TV station is located.

At one of the city’s busiest intersections, protesters rallied against war in Tucson, Ariz. — where one of Sen. John McCain’s Town Hall meetings turned into an anti-war revolt last week — and were greeted by nonstop honks, peace signs and raised fists of anti-war support from the passing motorists.

The demonstrations will only get bigger – as will the movement for society’s resources to be spent on human needs and not another war.