Taken from a speech by Workers World Party First Secretary Larry Holmes to a WWP forum in New York City on Aug. 22. 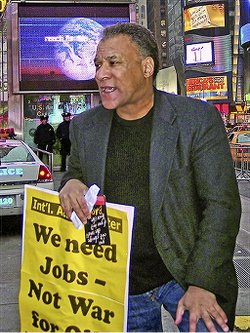 The AFL-CIO leadership says its Sept. 8 through 11 convention will be an important landmark, where they will discuss changing their whole orientation. When organized labor, as represented by the AFL-CIO or SEIU or Change to Win, is seen as moderate, conservative, out of sync with the needs of especially the most oppressed workers, what can working-class militants and activists expect to happen?

It is essential that the Party and worker organizers appreciate what these changes mean. Our conception of the working class must be revolutionary and not stationary. Organized labor is entering a transitional phase. So many things are in a transitional phase, including the death agony of this horrible global capitalist system.

The phase is going to be long and uneven. Workers in the public and private sectors will continue to fight defensive battles — “Save our pensions, don’t close our school, save our health care, don’t bust our union, reverse this anti-union law, reverse what they did in Michigan and Wisconsin.”

But the labor movement can re-emerge from this transitional phase in a radically different organizational form, and it must change ideologically.

These changes are being compelled by changes in global capitalism itself.

Marx on tasks of trade unions

I will read excerpts from a speech Karl Marx gave in 1866 at one of the first meetings to organize the First International. His remarks apply today.

Marx calls the unions, “Too exclusively bent upon local and immediate struggles with capital.”

We are not against local and immediate struggles with capital. Usually class consciousness develops on a local basis before it develops on a larger basis, and it is usually around immediate needs. But Comrade Marx tells us that we must also be concerned about the larger picture, not only nationally, but globally.

Marx again: “The Trades’ Unions have not yet fully understood their power of acting against the system of wage slavery itself. They therefore kept too much aloof from general social and political ­movements.”

Think of our own experiences when we try to get active participation — not just an endorsement — against something like the war on youth, or the LGBTQ struggle. The unions always seem to have their own interests, which are separate and apart from the general interests of the entire movement.

This is Marx on the future of labor. He could be talking about the present:

“Apart from their original purposes, the trade unions must now learn to act deliberately as organizing centers of the entire working class in the broad interest of its complete emancipation.”

Talking about organized labor, Marx says, “Considering themselves as acting as the champions and representatives of the whole working class, they cannot fail to enlist the non-society.”

The organized labor movement needs to solidarize itself with the millions of young workers who are either unemployed, underemployed, part time or temporary, and particularly those who are more likely to wind up in prison.

The unions could call a march and invest the considerable union dues from workers who are able to pay dues in such a project. Not just out of altruism, but as a way to embrace the plight of youth in a meaningful way.

This is an act of self-defense because history has taught us that if labor doesn’t embrace the unemployed — another class will.

And he goes on to talk about the need to embrace migrant workers and especially the very poor. We would include women, the service sector and finally “to convince the world at large [not just the neighborhood, the city or the state or country] that far from being narrow and selfish, aim at the emancipation of the downtrodden millions.”

Aims of working-class movement must change

The old way was to get contracts where possible, union representation, and then, from contract to contract, struggle with the boss to win a somewhat better share of what we call the surplus value that workers create. Then you sign the contract and you go back to work.

The problem is this requires capitalist stability. Instead, we face a global capitalist crisis that is both unprecedented and permanent and only likely to get worse.

I think for some time now there has been an illusion of capitalist stability because the bourgeoisie, through the Federal Reserve and other central banks in Europe and Asia, have been pumping trillions of dollars into the financial markets, making a lot of rich people richer.

But the problem is — this is the contradiction they are coming to terms with — pumping all this money into the market has not changed the deepening crisis of overproduction. We face a possible return to what happened in 2008 — the collapse of the financial market, or maybe even worse.

The conditions that the working class must fight under have changed. Many workers face depression-level unemployment, underemployment, outsourcing. Jobs move from continent to continent with the push of a button. Technology has had a radical effect on capitalist ­production.

There is a complete reorganization of work. Bosses can make workers compete not only with those next door but those in real time tens of thousands of miles away. The world is small. Athens, Greece, is no longer 6,000 miles away politically — it is New Jersey.

The old way, with the old aims that organized labor tried to function under, are gone and are not coming back. It does not mean that organized labor won’t try to pursue those old methods. But over time there will have to be a transition to organizing larger sections of the working class. The mass organization of larger and larger sections of the working class to fight in their interests should be central to any program.

Consider some of [AFL-CIO head Richard] Trumka’s ideas. Deepen their alliance with bourgeois progressive groups like the NAACP, the National Organization for Women and the Sierra Club, that fights around the environment.

He is so concerned that the AFL-CIO, if it does not change, could get isolated from other sections of the movement that he is willing to invite these groups onto the Executive Board, without paying dues, without a traditional union and to help the AFL-CIO figure out a strategy.

This is a current debate. Also, they are deepening their debate on how to deal with those sectors of our class who are not unionized and not in a position to have a union contract any time in the near future, if ever.

The union leaders worry that these workers won’t be able to give money to the Democratic Party. Can they even pay dues? But there are so many tens of millions of workers who don’t have a contract. The labor movement can’t ignore them.

Traditionally, organized labor has not paid much attention to workers in low-wage jobs. They felt that Wendy’s, McDonald’s, Pizza Hut, Starbucks, big-box store workers like Walmart were a waste of time to organize. But now they don’t have the luxury to organize manufacturing workers or the big service industries.

A few years ago the AFL-CIO set up what they call “Working America.” I think they say on their website that it has some 750,000 members. It was a way to bring workers who have no relationship to a union into the labor movement.

Trumka and others propose they help in organizing drives. If just 10 percent of them become organizers, that would mean 75,000 new activists supporting fast-food workers, workers at Walmart, immigrant workers. Imagine if they were on the streets, instead of supporting the Democratic Party or sitting at home.

We don’t say the developments in the AFL-CIO are revolutionary. We do say they open the possibility for struggle and revolutionaries must pay attention to them.