Fast-food workers turned off the grills, closed the cash registers and walked off their jobs on Aug. 29 to demand a living wage and the right to unionize. Thousands of workers in 60 cities, from Boston to San Diego and Raleigh, N.C., to Oakland, Calif., staged a one-day strike at 1,000 restaurants — the largest such action ever held in this industry.

This nationally coordinated strike day was the latest in a series of job actions in the 10-month campaign launched by community, faith-based and labor organizations, including the Service Employees union. Many fast-food workers are Black and Latino/a. Most earn the federal minimum hourly wage of $7.25 or close to it. They are demanding that McDonald’s, Burger King, Wendy’s, Yum Brand and their other corporate employers pay them $15 an hour. The Fight for $15 campaign is gaining strength and support. 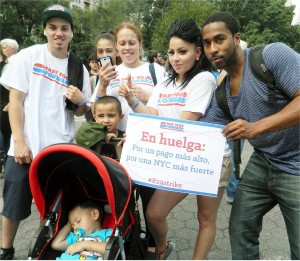 It’s noteworthy that the strikers’ numbers are growing and that these walkouts extended to southern and western regions of the U.S. — a first. On July 29, these job actions had occurred in just seven cities. The momentum has picked up as workers feel their power in unity and action and they attract more solidarity.

Most fast-food workers must work two jobs or even more to feed and house their families. They don’t receive automatic raises and frequently are stuck with the same wages and the same dead-end jobs for years after their hiring date.

Meanwhile, the fast-food industry annually rakes in $200 billion in revenue. These corporate tycoons reap profits by superexploiting their workers, paying them starvation wages. Today, as company earnings rise, the share going to wages is decreasing. 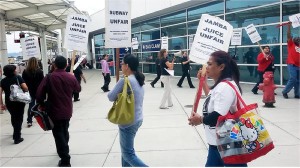 This makes the fast-food workers’ struggle for decent wages an urgent necessity. Risking firing from jobs they desperately need, these workers are courageously standing up and asserting their demands. Their allies and other workers know this, as support is building for their just cause.

Chanting “On strike! Shut ‘em down! Boston is a union town!” strikers and their allies closed down a Burger King and Wendy’s for hours in Copley Square, Boston, and then caravanned — with a school bus and sound truck — to a Roxbury Burger King. There, Nation of Islam’s Minister Don Muhammad led a strong strike support rally. Black and Latino/a strikers and relatives heard him report that he told management, “You need to negotiate with the workers now, or get the hell out of the Black community!” Strikers marched to bolster Dorchester and Roslindale strikers.

At Boston Common, Massachusetts AFL-CIO President Steve Tolman, SEIU organizers and other labor, civil rights and anti-war activists cheered and thanked the strikers for bravely defying the fast-food giants. They called for a minimum wage increase now, contrasting it to restaurant megaprofits.

City Councilor Tito Jackson and Mass Uniting organizer Darrin Howell led 250 angry workers into the Tremont Street McDonald’s. They threatened strikes if the owners don’t respond to the workers. At nearby Burger King, they delivered an unfair labor practice charge and insisted on no retaliation against Kyle King, 47, an African-American cashier who was suspended for strike support. King, whose hourly pay increased by only 25 cents over eight years, told Workers World: “I’m happy to be part of this movement. It’s for everybody who needs better pay.”

New York City was the site of many strike actions. Hundreds of chanting workers and supporters marched to, then filled, a midtown McDonald’s. Speakers at a Union Square rally of hundreds demanded a $15 hourly wage and unionization rights. SEIU local leader Hector Figueroa called for challenging the “Big Three” fast food companies — McDonald’s, Burger King and Wendy’s. He threatened more strikes and pledged SEIU and other labor movement support.

Fast food workers in Greensboro, Charlotte, Durham and Raleigh, N.C., joined the one-day national strike. Workers from more than 60 stores across the state walked off their jobs. The Rev. Dr. William J. Barber II, president of the North Carolina NAACP, addressed an afternoon demonstration in Raleigh of more than 200 workers and community members.

Fast-food workers and supporters gathered before dawn outside an east Atlanta McDonald’s to launch the campaign for a $15 hourly wage and the right to join a union. Workers from Church’s Chicken, Subway, Krystal and other restaurant chains were on the streets, chanting and carrying signs. They told the media about the deplorable working conditions they endure for $7.25 an hour. Fast-food workers, clergy and elected officials called for economic justice for the workers at an evening rush-hour rally at Five Points in downtown Atlanta.

Rep. John Lewis, returning from the 50th anniversary of the 1963 March on Washington for Jobs and Freedom, paid a surprise visit to the rally. Severely beaten and arrested multiple times during the historic Civil Rights struggle, Lewis urged the attentive crowd to “stay united and never give up” in the fight for justice. He praised the strikers for taking a stand and declared his support for their demands.

Striking workers shut down a McDonald’s on the Detroit/Southfield city line. Supporters joined them, so that 200 protesters filled the restaurant with signs saying, “We are worth more. Strike for $15.” A Checkers and two Church’s chicken restaurants were closed down, too. Further strikes occurred in Pontiac, Flint and Lansing, Mich.

Striking Wendy’s and McDonald’s workers addressed a Fight for 15 support rally outside a downtown San Diego Wendy’s restaurant. Present were SEIU and UNITE HERE! members and leaders. Also attending were unionists organizing taxi drivers and college security personnel, Teamsters activists fighting for a fair contract for United Parcel Service workers, an NAACP representative and other local activists who support the struggle for a living wage and good benefits for all working people. A rally high note was a local Muslim community leader’s support statement.

More than 100 fast-food workers in Oakland, Calif., rallied early at a McDonald’s in the Latino/a community and temporarily shut it down. Then they moved to and surrounded Kentucky Fried Chicken in the Lake District, and ended up at a final rally wedged between a McDonald’s and a Taco Bell on East Oakland’s Hegenberger Road.

Our Walmart workers’ participation boosted the last rally. They are also fighting for better wages and working conditions. Oakland airport workers came. Supported by UNITE HERE! Local 2850, they have fought for more than a year for union recognition and higher wages for airport fast-food and other concession workers. They just won a National Labor Relations Board-related settlement, forcing Subway and Jamba Juice airport concessions to reinstate fired employees and pay them back wages.

A one-day strike on Aug. 30 by 180 Oakland Airport food and retail workers, members of UNITE HERE! Local 2850, protested unfair labor practices, including an anti-union lawsuit by their employer, Host International. They have not had a contract for a year. Host seeks to gut their contract by reducing vacation and sick days, eliminating pensions, health insurance benefits and overtime pay, cutting wages of new hires and freezing them for longtime workers.

Fast-food workers are moving boldly. Their strength, determination and activism are a boost to all workers. The time for solidarity and active support is now.